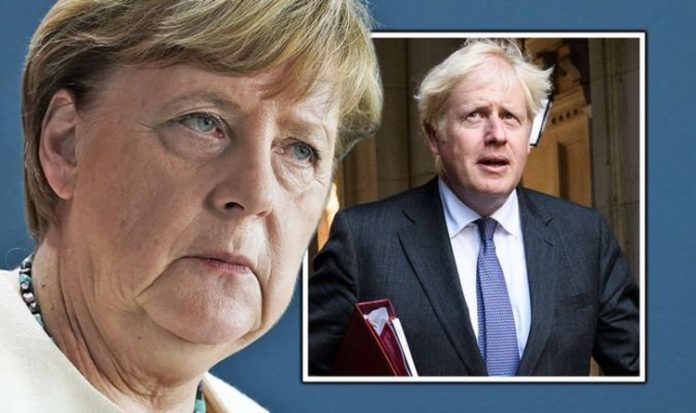 Angela Merkel suggested European Union businesses should ensure their no deal Brexit plans are updated as she forecast talks with the UK will go “down the wire”. Prof Alan Winters, the director of the UK Trade Policy Observatory in the University of Sussex, told Express.co.uk the Chancellor’s warning falls in line with Germany’s ability to “plan and prepare” for the future. He also suggested the warning was a subtle suggestion Mrs Merkel finally recognised a breakdown of trading relations is possible before the year ends.

Prof Winters said: “One of the things which we’ve come to expect from the Germans and Angela Merkel is an ability to look ahead and prepare and to plan.

“I wouldn’t interpret this as containing more information about whether or not we will fail.

“I don’t think it’s a statement with serious messages involved.

“I think it’s just a recognition that there is not 50-50 but quite a significant chance we end up with no deal.”

German officials have since warned of the huge financial losses businesses would incur in should no deal be struck with Britain at the end of the transition period on December 31.

The chief of the German Chamber of Commerce and Industry (DIHK) Martin Wansleben said the car industry would suffer a severe impact because of new tariffs introduced in the event of no new agreement coming into effect.

Mr Wansleben said: “For the automotive industry alone – which has the largest share of the trade volume between Germany and Great Britain – there is a risk of tariffs of at least £1.83billion in less than four months without an agreement.

“There is growing concern in the economy that the Brexit negotiations will fail.”

Brussels has accused the UK Government of seeking to override parts of the pivotal Northern Ireland protocol with its proposed Internal Market Bill.

The Prime Minister has however rejected the claims, insisting the British Government is seeking to protect the sanctity of the internal market from potential disruption in the event of a no deal Brexit.

A Downing Street spokesman said on Friday slight progress has been made in the talks with Brussels.

He said: “The UK’s negotiating team had useful informal discussions with the EU this week as we seek to reach an agreement by mid-October on our future relationship.

“These covered a broad range of issues and some limited progress was made, but significant gaps remain in key areas, including fisheries and subsidies.

“We will continue to work hard to bridge those gaps in talks next week, without compromising our fundamental position of being an independent country.”