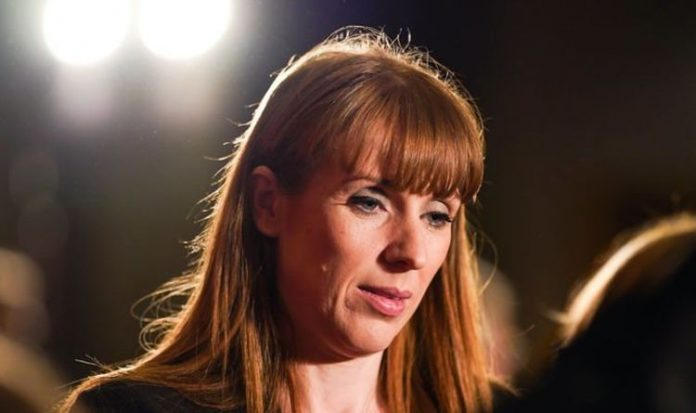 Angela Rayner and other Remain-backing Labour MPs who condemned the storming of the US Capitol should “take a look in the mirror”, Express.co.uk was told. It comes as the Labour Party was yesterday accused of a “stitch-up” after it scrapped its all-female shortlist for the next Mayor of Liverpool. One candidate has since come forward and threatened legal action if the decision is not reversed.

The party reopened the selection on Tuesday, just before the ballots were due to go to party members, with none of the existing candidates invited to apply.

Figures on the left of the party are now accusing Labour of trying to keep Anna Rothery – an ally of former leader Jeremy Corbyn – off the list.

Liverpool has been marred in a controversial legal battle over the past few months after its mayor, Joe Anderson, was released on bail following his detention as part of a fraud investigation.

Most Labour top brass have yet to comment on the crisis playing out, with the Labour Grassroots group calling on leader Sir Keir Starmer and deputy Angela Rayner to pledge their “commitment to diversity” and reverse the decision.

Ms Rayner has become a pivotal figure in the party since assuming the role last April.

She has several times hit the headlines, including after she called Prime Minister Boris Johnson “spineless”.

The comment came in the wake of the storming of the US Capitol by supporters of Donald Trump last month.

She condemned Mr Johnson and Foreign Secretary Dominic Raab’s failure to “not call out” Mr Trump’s claims of electoral fraud following the election in November.

Hers followed in a string of outrage aimed at the protestors from politicians within Labour.

Many Tory MPs quickly criticised those condemning the scenes in the US who had attempted to block the Brexit process.

When Sir Keir spoke out against the storming, Andrew RT Davies, leader of the opposition in Wales, said: “To be honest I’m not sure you’re in the strongest position right now given you campaigned to overturn democracy and the will of the British people.”

Similarly, Paul Embery, a leading trade unionist and Labour Party member, said there was a certain “irony” in Labour’s Remain politicians calling out the protestors, who attempted to thwart democracy when many of those same people campaigned to reverse the Brexit vote.

“Trump disgraced himself and his office through what he’s done, and I’m not defending the people who did what they did on Capitol Hill – I deplore those people.

“But there were people in this country who, while they may not have used the same methods as the protestors on the Capitol Hill, nonetheless tried to achieve the same outcome in terms of trying to overturn a democratic vote.

“Those people, before lecturing the rest of us on the importance of democracy, might want to have a look in the mirror.”

At the time, Susan Hall, the Tory group leader on the London assembly, took to Twitter to voice her outrage at the Remainer backlash.

She said she was “flabbergasted at the amount of Remainers screaming on Twitter that Trump voters should respect democracy – err, hellooo – pot – kettle springs to mind”.

Her tweet was later deleted, but she followed up, calling the Green MP Caroline Lucas – another prominent supporter of a People’s Vote like Sir Keir – a “hypocrite” for condemning the violence on Capitol Hill.

Following their comments, Ms Rayner wrote to the Tory party’s chair, Amanda Milling, saying she was “deeply concerned” at the comments.

Ms Milling shortly after wrote to them to warn them about the consequences of such language.

At the time, a Conservative party spokesperson said: “The scenes in Washington last night were disgraceful and unacceptable.

“We totally condemn them.

“We are investigating these comments.”

In her letter, Ms Rayner said: “I am deeply concerned that two Conservative elected representatives have equated democratic debate in the UK with an armed, violent and fundamentally anti-democratic assault on the US legislature, during which people lost their lives.

“These statements are absolutely unacceptable, extremely dangerous and must not be allowed to stand.

“To equate peaceful democratic debate in the UK with deadly violence in the USA validates the violence that we have seen in Washington DC, serves to legitimise and incite violence in our own country and undermines our democracy and democratic processes.”

Labour’s deputy has consistently voted on legislation for the UK’s membership of the EU.