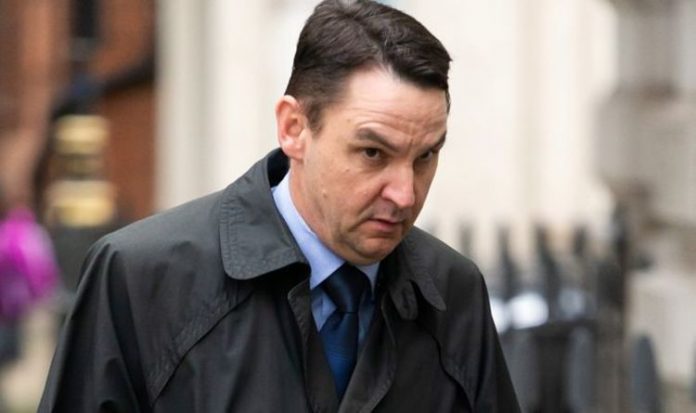 Barrister Daren Timson-Hunt was caught using his phone to film up a female passenger’s skirt on stairs on the London Underground. The 55-year-old was head of a Brexit legal team at the Department for International Trade at the time.

He was one of the first people to be convicted of upskirting when he admitted the offence at Westminster magistrates court last year.

Timson-Hunt was sentenced to a 12-month community order including 60 hours of unpaid work. Now a Bar disciplinary tribunal has decided against kicking him out of the legal profession and has suspended him for six months.

In a judgment published yesterday, tribunal chairman Alan Greenwood said: “The offence committed was a serious one if relatively new. It involves filming. It was not touching but nevertheless it was serious.

“However, in the meaning of the sanctions guidance it is not a serious sexual offence.

“He provided glowing references. It is clear that at the time he was working very hard. He was working on the goodsrelated aspects of Brexit and told the tribunal it was not uncommon to work 80 hours per week.

“His wife was ill. He was subject to domestic pressures. This is how he came to commit the offences and in doing so jeopardised his career. He lost his job.”

Gina Martin, who campaigned to make upskirting a criminal offence, said: “I am so disheartened that a man who took photos of someone’s crotch for sexual gratification without them knowing is allowed back into such a powerful position.

“Daren Timson-Hunt is now on the sex offenders register and yet has not been disbarred.What does that say about justice?”

She added: “Alan Greenwood’s quote is worrying too. ‘Upskirting is not a serious sexual offence’ is irresponsible rhetoric to be promoting.

“The fact that half of this statement focuses on rebuilding his character, not the sexual offence, is a plain example of how we excuse men for this behaviour.”

The tribunal heard that Timson-Hunt, of Thurrock, Essex, is now doing manual work and his earnings are limited.

At last month’s hearing he admitted charges of misconduct for the offence at Embankment station in June 2019.

His victim said she felt “incredibly violated” and has not worn skirts or dresses since.