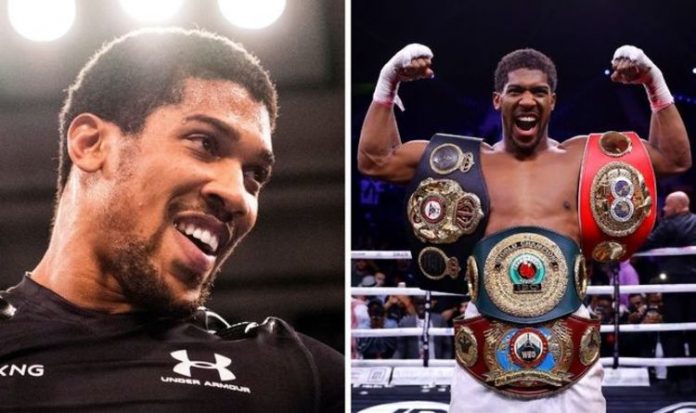 Talks between the EU and UK remain ongoing, although both Ursula von der Leyen and Boris Johnson have claimed the two sides are so far apart, a deal is unlikely to be made. Should the UK not agree a pact with Brussels, Britain will trade on World Trade Organisation terms with the EU from December 31. Brexit negotiations have continued to dominate political debate for the past three years, since former Prime Minister Theresa May opted to trigger Article 50, thus beginning the UK’s withdrawal from the bloc.

Since then, tensions within Parliament, as well as relations with Brussels, have strained. It led to Mrs May eventually standing down as Prime Minister after she was unable to secure an agreement.

Joshua, a world champion boxer, was once quizzed on how he would approach Brexit negotiations, when asked what he would do if he was Mrs May.

The 31-year-old was queried as to whether he would “approach it like a boxing match, or a game of chess”, before answering: “A game of chess.

“Strategic moves. Because I’m trying to get, well, I’m manoeuvring my way to certain positions in order to get checkmate.

Boxing: Joshua in action in his last fight (Image: GETTY)

“In boxing you’ve got to bulldoze people down, and that’s it. So, I’d play it like a game of chess.”

Joshua takes on Kubrat Pulev tonight in a bid to hold on to his world heavyweight belts, with the winner expected to take on Tyson Fury to unify the division next year.

His comments were made during a discussion in 2017 with ODN YouTube channel, and came as Mrs May was set to start her first discussions with Brussels over the UK’s departure.

JUST IN: Anthony Joshua losing to Kubrat Pulev ‘would not be a shock’ – Chisora

Brexit: Theresa May after she announced her resignation (Image: GETTY)

Mrs May would ultimately fail in her attempts to capture a deal, but Joshua would say a year later to CNN that “you could have put any politician in her place and they would have dealt with it in the same manner”, adding: “She’s doing the best she can.”

The Brexit vote split the nation, with 52 percent voting to Leave the EU, while 48 percent wished to Remain.

With families, friends and relationships in debate over the referendum result of 2016, Joshua said that “even though there are uncertain times in the UK… people are blessed”.

He explained: “You’ve got water to drink, food to eat, and homes to go back to, regardless of what political circumstances are happening around us, we’re in a blessed position.

He added: “Because things could definitely be a lot worst. That’s where I take inspiration from, because there are a lot of things happening outside of the UK.”

Joshua isn’t the first fighter to offer their take on how negotiations between the two sides should be carried out, as in British boxer Dereck Chisora once delivered a stunning verdict while chatting to eurosceptic Nigel Farage.

Chisora, who backed Mr Farage’s Brexit Party in the last European elections, told the ex-LBC radio host how negotiators on the UK’s exit from the EU should be carrying out their discussions.

Joshua vs Pulev: How they match up (Image: EXPRESS)

He was speaking moments after knocking out Liverpudlian fighter David Price, in a bruising contest in October 2019.

Unearthed footage showed Chisora hugging Mr Farage before he asked him whether he’s been to a boxing match before.

Chisora, who floored Price in the fourth round, said: “Mate I wasn’t hanging about, I didn’t want to waste no time.

“They’re saying they’re wasting time on Brexit, but like that I just want to get it done.”