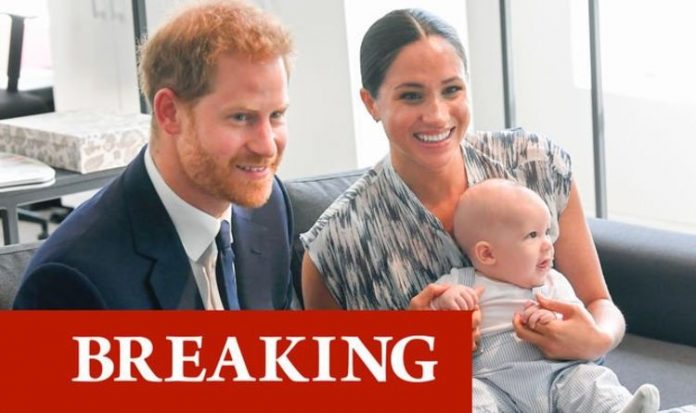 Proud dad Prince Harry, 36, revealed his son Archie Harrison’s, one, first word while speaking to longterm pal James Corden in a special new TV interview filmed in Los Angeles. Harry and his wife Meghan Markle, 39, have been based in California since their stepdown as senior royals last year and intend to raise their son Archie there as a private citizen.

The couple, who are currently expecting their second child, last week revealed they would not be returning to their roles as senior royals a year on from quitting the Firm.

Speaking during an open-top double-decker bus tour of LA, the Duke told Mr Corden: “My son is now over a year and a half, he is hysterical, he’s got the most amazing personality, he’s already putting two, three words together, he’s already singing songs.

He later added: “Interestingly, my grandmother asked us what Archie wanted for Christmas and Meg said a waffle maker, she sent us a waffle maker for Archie so breakfast now, Meg makes up a beautiful organic mix, in the waffle maker, flip it, out it comes, he loves it. Archie literally wakes up in the morning and says ‘waffle’.”