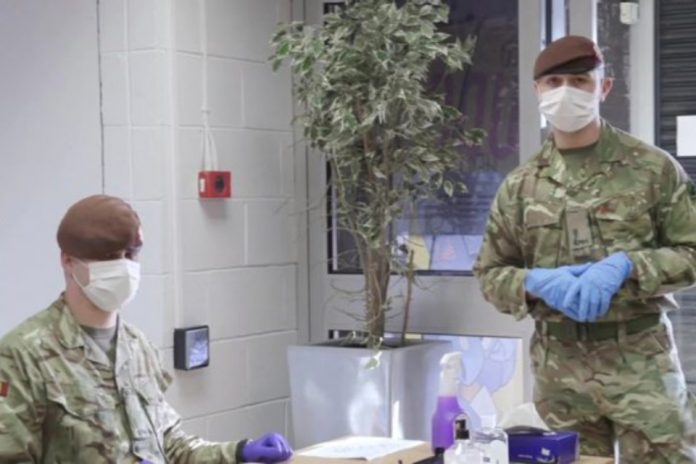 Members of the Armed Forces will be deployed across Wales this winter to help set up and operate vaccination centres in the community.

Secretary of State for Wales Simon Hart and the Defence Minister for the Armed Forces James Heappey have approved a Military Aid to the Civilian Authorities (MACA) request for the Welsh Government. The MACA provides more than 90 service personnel to support Wales’ Health Boards in rapidly establishing and operating vaccination centres.

As the vaccination programme is rolled out during the rest of December and into January, military personnel will support the setting up of additional capacity as greater quantities of vaccine are made available. And for the first time since the vaccine has been rolled out, trained defence medics will also support the administering of the vaccine.

The military aid request runs between 4 January to 28 February 2021 and will see members of the Armed Forces delivering the vaccine, setting up equipment and carrying out a number of other functions.

The roll-out of the vaccine is a considerable logistical challenge, so we have approved the deployment of Armed Forces personnel to help with its distribution in Wales.

The use of the military to help with this vital work shows how we can pull together to meet the needs of the whole of the United Kingdom as we tackle the pandemic.

With case rates high across many areas of Wales, it is important that we continue to support the Welsh Government. The huge number of vaccines that the UK Government has procured and the assistance of the Armed Forces in distributing them will help turn the tide in this fight.

Since the beginning of the pandemic, our Armed Forces have stepped up to support health services across the UK.

In Wales, our personnel have already helped with the distribution of PPE, construction of a temporary hospital in Cardiff and, most recently, the rollout of community testing in the South Wales Valleys.

I’m pleased we can now support the vaccine rollout and I am proud defence has responded quickly to support this urgent task.

After becoming the first country to approve a vaccine for use, the UK Government has bought vaccines on behalf of all parts of the UK and distributed them around Wales, England, Scotland and Northern Ireland ahead of last week’s (8 December) initial rollout.

Approved vaccines will be available across the UK, free at the point of delivery and according to need.

Vaccination will be managed by the health services in each nation: NHS England and NHS Improvement, NHS Wales, NHS Scotland, and Health and Social Care Northern Ireland. Armed Forces personnel have deployed to assist the NHS and the Devolved Nations with planning and logistic support for the delivery of a vaccine.

The UK Government has also invested over £230m into manufacturing a vaccine. The UK Government will also meet the cost of vaccines which will be distributed to all nations of the UK, Crown Dependencies and Overseas Territories.

The MOD currently has around 14,000 personnel held at graduated readiness as part of the Winter preparedness 2020 Package. This package will ensure defence remains ready to respond to requests for support at necessary pace, including but not limited to COVID-19 support.