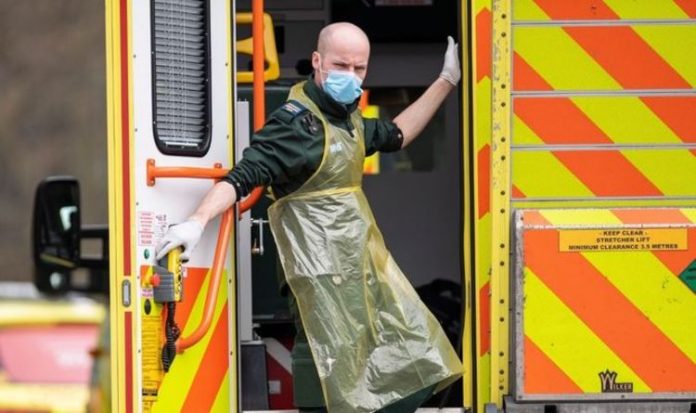 While the EU struggles with its own vaccination programme, experts have revealed the Pfizer/BioNTech and Oxford/AstraZeneca vaccines have been shown to reduce hospitalisation by more than 80 percent. In the study by experts from the University of Edinburgh, the University of Strathclyde and Public Health Scotland compared those who have had their first jab with those who have not. In the fourth week after receiving the first dose, the Pfizer jab was found to reduce hospitalisations by 85 percent while the Oxford vaccine caused a reduction rate of 94 percent.

Following the release of the study, lead professor Aziz Sheikh, director of the University of Edinburgh’s Usher Institute, claimed they are encouraging signs for the future.

Prof Sheikh said: “These results are very encouraging and have given us great reasons to be optimistic for the future.

“We now have national evidence – across an entire country – that vaccination provides protection against COVID-19 hospitalisations.”

Dr Jim McMenamin, national COVID-19 incident director at Public Health Scotland, added: “These results are important as we move from expectation to firm evidence of benefit from vaccines.

“Across the Scottish population, the results show a substantial effect on reducing the risk of admission to hospital from a single dose of vaccine.

“For anyone offered the vaccine I encourage them to get vaccinated.”

The experts also expressed their hope the vaccine figures show the epidemic may be able to be controlled due to their efficacy.

Due to the vaccine programme, the Government has managed to reduce not just hospitalisations but also cases.

JUST IN: Brexit LIVE: Furious Boris to hit back after Brussels snub

With over 17 million now given their first jab, the Prime Minister will announce today the reopening of schools on March 8.

All pupils will return on that date and will be able to participate in after-school sports and activities.

Although outlining a cautious approach to the end of the lockdown, Mr Johnson will lift the rules surrounding outdoor mixing.

In tandem with schools, the public will be able to mix outdoors with one other person.

If case numbers drop and the vaccine programme progresses well, larger groups will be able to mix outdoors on March 29.

This easing of restrictions is set to be the first step of four with at least five weeks in between each one.

Vaccine minister, Nadhim Zahawi said today: “At the moment, the focus is very much on the steady as she goes.

“Outdoor versus indoor, priority being children in schools, second priority is obviously allowing two people on March 8 to meet outside for a coffee to address some of the issues around loneliness, and of course mental health as well.

“And then the 29th is two families, or rule of six, coming together, and outdoor sporting activities as well.”