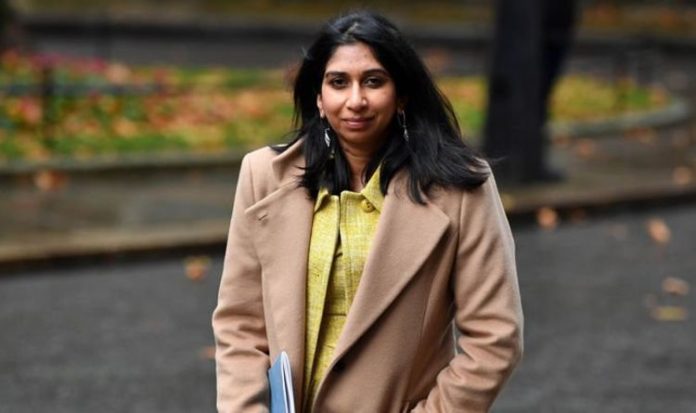 The move by Ms Braverman is an unusual step for the Attorney General, the government’s most senior lawyer, but is meant to be a signal over how seriously she takes the issue. PC Harper was killed after his three teenage killers dragged him for more than a mile to his death by a getaway car in Berkshire. The 28-year-old policeman died of catastrophic injuries after his ankle got caught in the strap of the car after being called out to a suspected burglary.

Controversially the jury convicted the three of the lesser sentence of manslaughter and not of murder leading to demands for a mistrial after allegations that the jury may have been interfered with.

The driver of the car Henry Long received 16 years in prison and his accomplices Albert Bowers and Jessie Cole both received 13 years.

However, under sentencing guidelines the three killers could all be out in eight years which sparked fury from PC Harper’s family and the public.

There was also anger that the three culprits smirked after the sentence was read out while their families cheered and hugged each other.

The shortness of the sentences led Ms Braverman to decide to appeal their leniency and push for longer terms after a campaign by the family and supporters.

A friend of Ms Braverman’s told the Sunday Express: “She was met with strong opposition from civil servants to pursue this case but she held firm and has done the right thing.

“She made it clear she wants to be there to underline how important this issue is to the government and how seriously it takes this case.

“If the judges uphold the original sentences then she will have still done the right thing and it will be another example of wet, liberal judges being soft on criminals.”

The appeal is due to be heard on Tuesday.

The Government is bringing in legislation to toughen up sentences overall amid concerns that the legal system is currently too soft.

PC Harper’s widow Lissie said: “Society must offer the greatest protection for those dedicated public servants who are killed protecting it. That is what Harper’s Law would provide. An appropriate deterrent and suitable punishment,” Lissie said.

“The law must be changed. We want to work with the Government, politicians of all parties and the fantastic British public on this.”