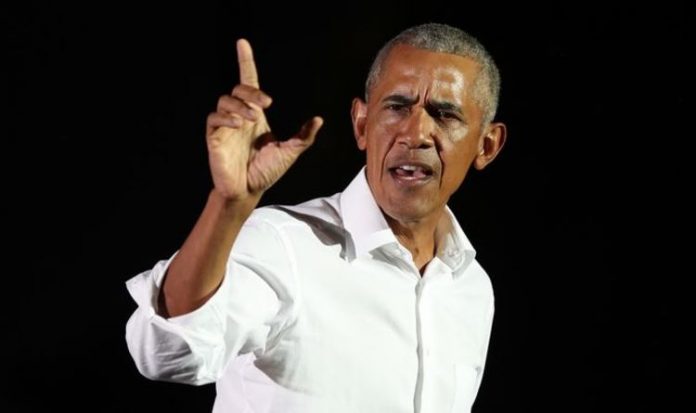 The former US President said the Queen “didn’t seem to mind” that Michelle draped her arm around her shoulders. He revealed the details of the controversial moment, which took place at a G20 summit in 2009, in his new book A Promised Land.

Mr Obama had joked with his wife about wearing “those little hats and carry a little handbag” for the event.

He told her: “You should have taken my suggestion and worn one of those little hats. And a little matching handbag!”

The book, which was released on Tuesday, provides readers with an insight into the former President’s life, from his childhood through his first term as president.

The memoir will be published in 25 languages with a second volume is set to be announced.

Ms Obama also gave her account of the engagement at Buckingham Palace in her 2018 memoir, Becoming.

She had been speaking to the Queen about their sore feet after walking in heels all day when she draped her arm around Her Majesty.

“And with this, she busted out with a fully charming laugh.”

Ms Obama explained that they were just “two tired ladies oppressed by our shoes”.

She echoed her husband’s claims that the Queen “was OK” with her informal gesture despite facing backlash from royal fans.

Ms Obama wrote: “I then did what’s instinctive to me any time I feel connected to a new person, which is to express my feelings outwardly. I laid a hand affectionately across her shoulder.