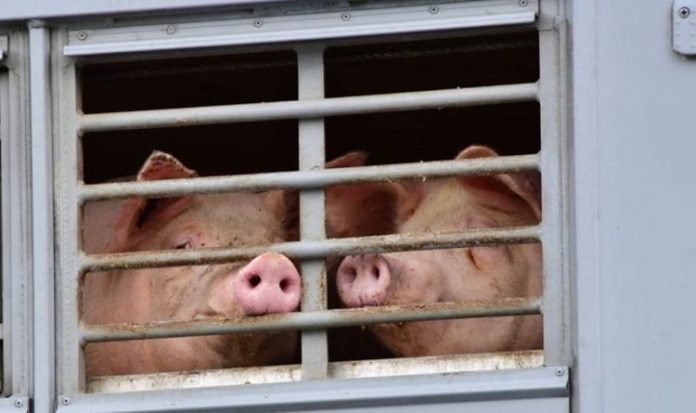 Emergency services raced to the scene of a three-vehicle crash involving a tractor and trailer, a HGV and a car on the A1 near Cockburnspath in the Scottish Borders on Monday, November 16th. The pigs died at the scene after the lorry carrying them overturned and caught fire.

Some of the animals suffocated by the smoke caused by the blaze whilst three people were injured in the incident and were taken to Edinburgh Royal Infirmary for treatment.

PETA, an animal welfare organisation has now written a letter to East Lothian Council asking for planning approval to erect a tombstone memorial at the scene.

Under the plans, the tribute will feature an image of a pig next to the words “In memory of the pigs who suffered and died in a lorry accident at this spot. Try vegan.”

It would remind all drivers, including those with animals on board, to slow down and travel safely.

The sign would also point out that everyone can “prevent abattoir-bound lorries from travelling the motorway by choosing vegan meals”.

Elisa Allen, Director of PETA, said: “For nothing more than some chops, this crash left animals suffering on an already terrifying trip, likely to the abattoir.

“PETA’s roadside memorial can prevent further tragedies, including human ones, by reminding people to drive with care and spare a thought for animals by no longer eating them.”

A spokesperson for Police Scotland said: “The majority of the pigs were safely removed from the vehicle, however unfortunately approximately 70 died.

The bird was rescued and is being cared for by the Wildlife Rescue & Animal Ambulance Service in Enfield, North London.

Her Majesty is one of the most successful owners and breeders of racing pigeons in the UK and owns around 200 birds.

“These loyal birds suffer tremendously when separated from their companion to be used for racing, as the high death toll means they may never be reunited.

“PETA is respectfully urging Her Majesty to stop sending birds to their deaths for this heartless ‘sport’.”