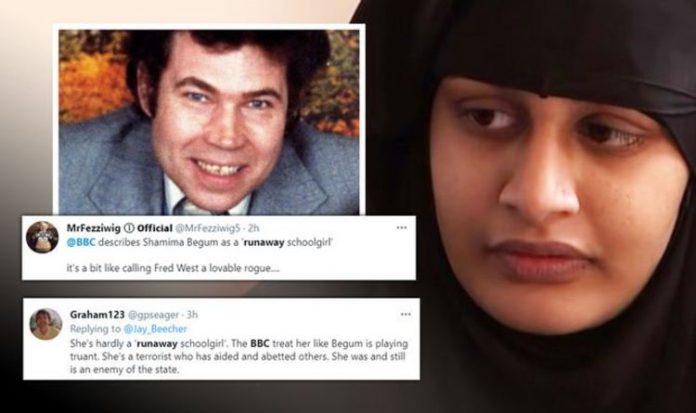 Today, the Supreme Court ruled the ISIS bride should not be able to return to the UK to pursue an appeal against the removal of her British citizenship. Lord Justice Reed said: “The Supreme Court unanimously allows all of the Home Secretary’s appeals and dismisses Ms Begum’s cross-appeal.” Begum is still able to appeal the decision from abroad.

However, the BBC has faced backlash after describing the ISIS bride as a “runaway schoolgirl” with many calling for the corporation to be defunded.

“It’s a bit like calling Fred West a lovable rogue…”

Another social media user said: “The left-wing campaigners at the BBC call Begum a ‘runaway schoolgirl’.

“The Muslim terrorist who, in a filmed interview, casually described being totally relaxed about seeing severed heads of Islam state victims in dustbins.”

Someone else said: “The woke BBC call her a ‘runaway schoolgirl’.

“Just look at the comments across Twitter about Shamima Begum.

“She was and still is an enemy of the state.”

A fifth person described her as an “evil rat” and claimed she “neglected her children” and stitched up suicide vests.

They said: “The BBC call Shamima Begum a ‘runaway schoolgirl’.

“Who neglected her children, & smirked over her deeds.

“She only wants back in because ISIS lost. Leave the evil rat to rot.”

Begum was 15 when she and two other girls left the UK in 2015 and travelled to Syria to join the Islamic State group.

Her UK citizenship was revoked by former Home Office secretary Sajid Javid after she was discovered in a refugee camp in 2019.

The Home Office made the decision due to concerns over security if she returned to the UK.

Begum, now 21, challenged the decision in the Court of Appeal last year after a tribunal had found the removal of her citizenship had been lawful.