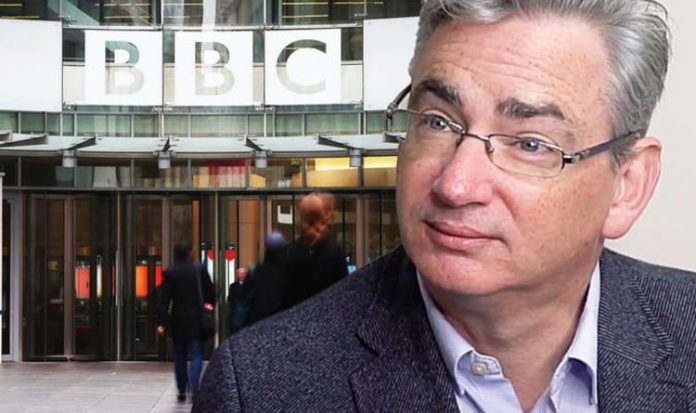 Julian Knight, Tory MP for Solihull, tore into the BBC yesterday at a passionate panel discussion. The MP, who is chair of the Digital, Culture, Media, and Sport Select Committee, said the corporation must become more reflective of its audience and the UK as a whole.

Mr Knight made the comments during a panel discussion titled ‘New Vision? The Future of the BBC’ on Wednesday.

He said he was concerned there was a genuine disconnect between the BBC and its audience.

Mr Knight also pointed out the “woke culture” within the corporation was causing viewers to switch off.

He said: “That woke culture is a massive turn off for a lot of viewers.”

As a result, he urged the BBC to become more in tune with its audience.

Mr Knight said: “They need to be more in touch and more reflective of the country.

“Rather than bending it to fit its values.

“The BBC needs to serve the audience that pays a licence fee and that means have a diversity of opinion and coverage.

“I think it will be in trouble unless it does reform.”

However Mr Gibb, who worked as Downing Street’s Director of Communications from 2017-2019, said he is sure the BBC understands that it must adapt.

He said: “I am confident the BBC has got that message and it will change.”

The BBC has often been criticised as being too “woke” – a slang term that means social awareness, particularly relating to racism and social injustice.

For example, earlier this month the BBC was accused of being “woke” for its decision to scrap the singing of Rule, Britannia! and Land of Hope and Glory at the Last Night of the Proms over the songs’ perceived links to colonialism and slavery.

Tim Davie, the corporation’s new Director-General, later u-turned on the initial decision after the “terrible damage” the row caused.

The BBC has also been criticised for imposing politicised values on its audience through its drama series and even children TV shows such as Doctor Who when it introduced a female doctor and politically correct storylines.