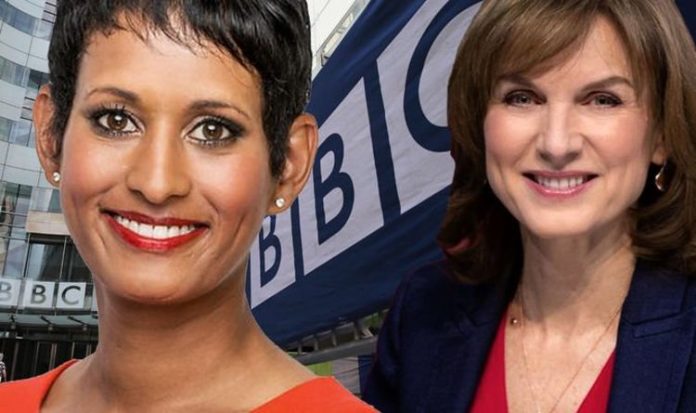 BBC stars such as Fiona Bruce, Naga Munchetty and Simon Jack have all been criticised for taking on other paid work, despite earning eye-watering salaries at the corporation. But in a bid to crackdown on alleged bias, new director-general Tim Davie will force employees to declare outside earnings on a public database.

Currently, there is no central database of BBC employees’ outside work and they do not have to disclose how much they earn.

But that is all set to change as Mr Davie will bring in a Parliament-style register of outside earnings for its stars.

He said presenters and journalists risked their impartiality when earning five-figure sums for corporate work.

The new head of the BBC hopes the public register of interests will shame stars and prevent them accepting such jobs.

Mr Davie had previously said there would be a “clearer direction on the declaration of external interests”.

He said the move will “ensure BBC staff are not creating conflicts of interest as they cash in on their profile”.

Mr Davie, who is due to give a speech later today, is expected to say impartiality is the bedrock of the BBC and must be observed both on and off-air.

The BBC warned the presenter that she risked a “conflict of interest” for appearing on the video, where she said the luxury carmaker was “engaging and assisting employees” during the coronavirus crisis.

Her participation potentially compromised the BBC’s impartiality, since Ms Munchetty could be asked to front a discussion of the famous car brand’s financial troubles.

This is because the firm recently announced it was cutting 500 jobs after losses soared to £227million following a plunge in sales revenues.

The BBC Breakfast presenter charges up to £10,000 a time for corporate work.

Question Time host Fiona Bruce, who earns a staggering £800,000, and business editor Simon Jack, who earns £175,000, were both criticised for agreeing to speak at a conference hosted by legal firm Henley & Partners accused of inadvertently helping criminals obtain EU passports.

Both BBC stars pulled out of the event.

North America editor John Sopel, who is on an annual salary of £240,000, has presided over conferences for JP Morgan.

He has also spoken at a corporate event for the tobacco firm Philip Morris.