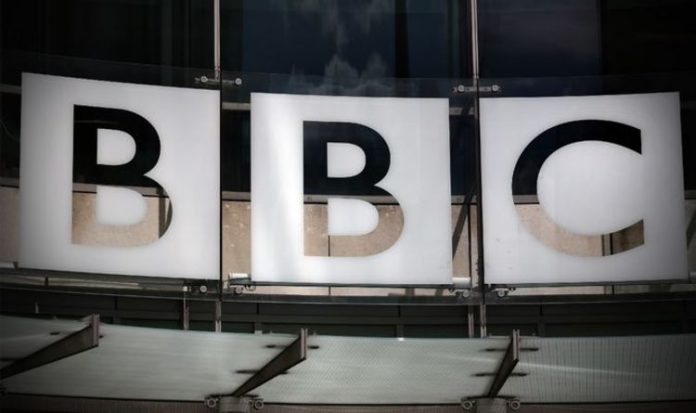 The broadcaster has stopped published the winning numbers of the Lotto and the Euromillions on its red button text service. But the move has prompted a furious reaction from pensioners and disabled people who rely on the BBC to find out if their numbers have come up.

The corporation told people they could head to rival channels ITV or STV for the lottery results.

A BBC spokesman said: “Lottery results were removed from the service on Wednesday.

“They are however broadcast every Saturday night on ITV and STV.”

The service, which has announced the lottery results twice a week on Wednesday and Saturday nights for the past 20 years, ended on Wednesday.

The BBC has sparked fury over its decision to axe the lottery results from its text service (Image: GETTY)

The broadcaster has stopped published the winning numbers of the Lotto and the Euromillions on its red button text service (Image: SWNS)

But the decision to scrap the lottery results – which many pensioners and disabled people depend on as they do not use the internet or smart phones – has led to a backlash.

Rosalind Hanks, from Cornwall, has been using the service to check her husband’s lucky numbers every week since he died seven years ago.

The 74-year-old, who is in a wheelchair, said: “My late husband used the same numbers ever since the lottery started.

“He always said they were going to win and my husband did not lie, so I know the numbers will come up one day.

Te move has prompted a furious reaction from pensioners and disabled people who rely on the BBC to find out if their numbers have come up (Image: SWNS)

Brenda Beech, 78, of Walsall, West Midlands, said: “I could not believe it when I tried to check the results on Wednesday night and the numbers were no longer there.

“Many senior citizens who do not have internet access or smartphones rely on the Red Button text service for the results, especially now there is another lockdown.

“What is particularly galling is that the BBC has taken one of our few remaining pleasures away, while at the same time making those of us over 75 pay for our TV licence.”

The corporation told people they could head to rival channels ITV or STV for the lottery results (Image: GETTY)

Dave Brown, of Tamworth, Staffs, said: “Without the red button my mum, who is 82, could not check the lotto numbers. I got her a tablet but she cannot use it at all.”

Katie Irons, also from Tamworth, added: “I am furious, I am pensioner, I have a husband who is 85, who checks the horses results and the lottery, what are we going to do now?”

The National Federation of the Blind of the UK (NFBUK) is demanding new director-general Tim Davie brings back the lottery results.

NFBUK Campaign coordinator, Sarah Gayton, said: “We are hoping Tim Davie does a swift u-turn of this decision.

The service, which has announced the lottery results twice a week on Wednesday and Saturday nights for the past 20 years, ended on Wednesday (Image: GETTY)

“This must be one of the easiest and quickest pages to update on the teletext service, and one that so many people rely on to see if they have won the jackpot.

“With the new lockdown it is imperative Tim goes back and relooks at this decision, as many people will be housebound again and it is essential they can access these results.

“This is a very simple positive thing Tim can do to help many people get through this pandemic.”

The BBC said the decision to drop the lottery results was announced in September as part of changes to the red button text service.

A BBC spokesman said: “As part of this, we outlined the fact we could keep most valued text and data elements of the red button service.

“However, to enable the continuation of the most valued text and data elements of the service, we are having to find ways to reduce cost and complexity elsewhere.

“This will mean we will be no longer be providing Lottery results or English regional sport pages and individual sports’ headlines, besides football and those on the main sport pages, from mid-2021, via the red button.”