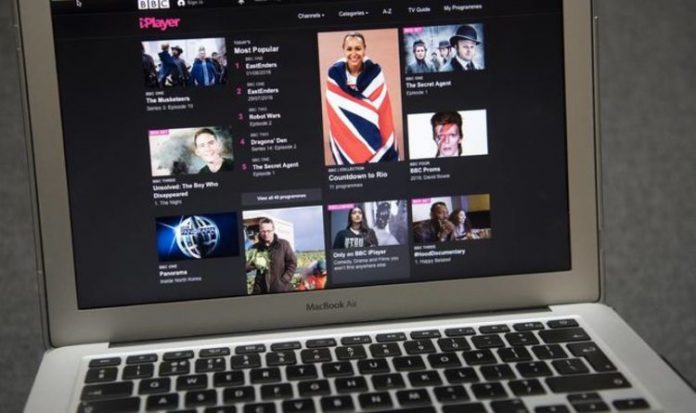 The Defund the BBC campaign group conducted a survey on Savanta ComRes, where they asked 2,274 adults aged 18 and above in the UK between October 16 and 19, 2020, about whether they thought people should pay for the licence fee. The results showed 59 percent of voters believe the licence fee should not continue in its current form. A total of 51 percent of voters said people should not need a licence to watch non-BBC live TV.

Up to 14 percent admitted they never watch BBC TV channels, with more than a third watching it on two days or less.

And the poll showed Londoners are 30 percent more likely than the rest of England to feel the BBC reflects British values.

The Defund the BBC blasted the corporation for being “no longer sustainable” after sharing the results.

They tweeted: “A BBC licence fee that taxes Britons for watching any live TV does not have the support of the nation.

The BBc has come under fire over the licence fee (Image: GETTY)

“The licence fee is no longer sustainable.”

The group added the “game is up” for the broadcaster as there is other alternative content for viewers to watch instead.

They tweeted: “For years the BBC has insulted and patronised those who fund it in an attempt to attract those that never will.

“But now that there is so much on-demand content to choose from, as the polling shows, the game is up.”

READ MORE: Defund the BBC claims you can watch ‘on demand’ WITHOUT a TV licence

Liam Deacon, head of press at Defund the BBC, warned the polling showed the BBC is “losing touch” with its viewers.

He told Talk Radio: “The BBC is in a perfect storm.

“This headline figure that 60 percent of people don’t think the licence fee can continue in its current form really is the culmination of a lot of different factors and it shows the BBC as it is is completely unsustainable.

“People are consuming media in different ways; Netflix, Disney, Amazon have completely overtaken it as it refused to commercialise.

BBC customers are able to cancel their TV licence for a number of reasons (Image: GETTY)

“It’s also a reflection of the fact there are new competitors showing public service broadcasting can be done well.

“And they are annoying the elderly and neglecting their interests and needs.

“Times have moved on.”

The BBC has been blasted for being “no longer sustainable” (Image: EXPRESS)

She said: “Those wanting to cancel their licence but finding themselves blocked should simply cancel their direct debit and write TV licensing an email confirming that they no longer need a licence.”

The BBC told Express.co.uk that customers are able to cancel their TV licence in a number of ways.

This includes if they no longer watch or record programmes as they are being shown on TV, on any channel.

They can also cancel if they watch or stream programmes live on an online TV service or downloads or watch any BBC programmes on iPlayer.

A BBC spokesperson told Express.co.uk: “We have more calls than usual at the moment and they are taking longer to answer as we operate in accordance with Covid-19 government guidelines.

“We’re sorry for any inconvenience this may have caused.

“Customers are able to cancel their licence over the phone.”

Express.co.uk has contacted the BBC for a comment about the Savanta ComRes poll.