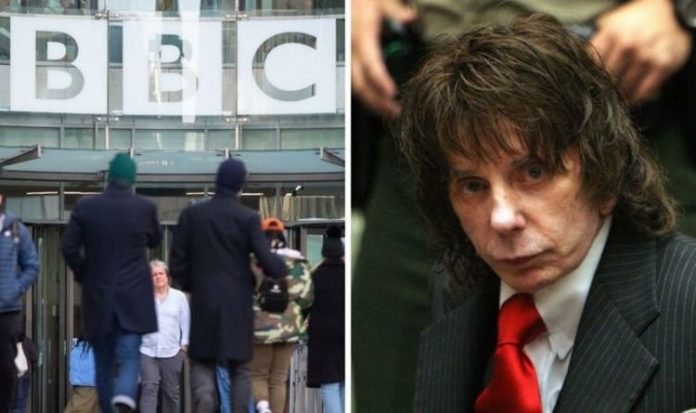 Spector died on Saturday aged 81 in prison while serving a minimum sentence of 19 years for murdering actress Lana Clarkson in 2009. The first version of the breaking news story on the BBC News website used the headline: “Talented but flawed producer Phil Spector dies aged 81”. This text was quickly changed to: “Pop producer jailed for murder dies at 81.”

The BBC said its original headline “did not meet our editorial standards”.

The Corporation insisted the headline was “changed within minutes” while a tweet of the story that had been sent out automatically with the headline in question was quickly deleted.

A statement from the BBC said: “The breaking news story on Phil Spector’s death was published with a headline that did not meet our editorial standards.

“This was changed within minutes and we also deleted a tweet that had gone out automatically with the original headline. We apologise for this error.

“Our coverage of the story across BBC News has been clear that Phil Spector was convicted of the murder of Lana Clarkson and had a long history of violence and abuse.”

Reacting to the original version of the BBC’s story, pop star Lily Allen tweeted: “Rolling eyes at all the journos deliberately downplaying Phil Spector being a murderer in their headlines, so everyone points this out while linking to their articles resulting in lots of clicks.”

“The BBC, for example, initially tweeted: “Talented but flawed Producer Phil Spector dies aged 81.” (It then deleted the tweet.)

“Flawed? Are you kidding? Being messy is a flaw; being a murderer is something else entirely.

“Reuters’ tweet mentioned Spector’s murder conviction, but made it seem like an inconvenient afterthought: “Influential rock producer Phil Spector, who changed pop music and was convicted of killing actress Lana Clarkson, died at the age of 81.”

She added: “Tweets and headlines don’t lend themselves to nuance; even with the best intentions, they can easily sound flippant or facile.

“However, the examples above aren’t just illustrations of poor phrasing. They’re a reflection of how a man’s “genius” is often viewed as more important than a woman’s humanity.”

Spector’s death was confirmed by the California Department of Corrections and Rehabilitation on Sunday evening.

He was convicted of murdering actress Clarkson in 2009.

The 40-year-old, known for starring in films including Barbarian Queen, died of a gunshot fired into her mouth while at Spector’s mansion on the outskirts of Los Angeles that same year.

Spector, known for his “wall of sound” recording technique, had claimed Clarkson’s death was “accidental suicide” and that she “kissed the gun” before it went off.

He was tried twice before being convicted in 2009.