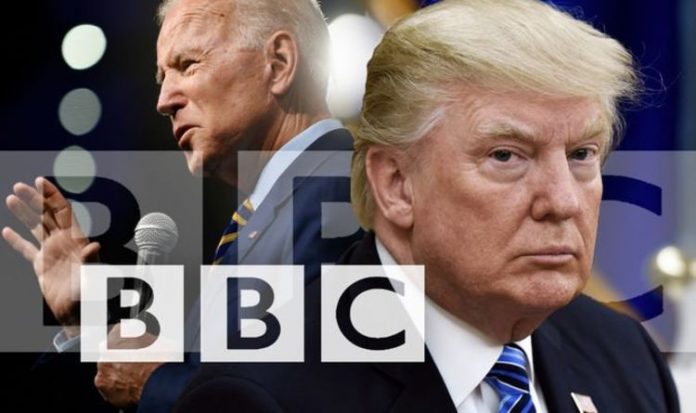 The BBC has come under fire this week, with viewers accusing the Corporation of “anti-Trump” bias in its coverage of the US election. Furious viewers have taken to Twitter over the past two days to protest against the BBC’s purported left-wing and pro-Biden bias. Brexiteer Kate Hoey, a former veteran Labour Party MP of 30 years, has become the latest to launch a scathing attack against the BBC’s coverage of the US election.

She accused most mainstream media journalists of recently putting “their own prejudices first in reporting” but namedropped BBC News in particular.

The former MP tweeted: “No wonder people are surprised this morning at what is happening in #USElection.

“Most of the MSM journalists put their own prejudices first in reporting in past months especially BBC News.

BBC news: The broadcaster has been accused of bias with its coverage of the US election (Image: GETTY)

BBC news: The Corporation of ‘anti-Trump’ bias in its coverage of the US election (Image: GETTY)

“But Andrew Neil and Piers Morgan told the truth.”

Dozens of people agreed with Ms Hoey’s savage attack against the BBC’s coverage of the US election this week.

One person wrote: “I saw the interview with the BBC News presenter trying her hardest to extract personal opinion for gotcha collateral.

“Three failed attempts to get personal opinion from Mr Raab politely staying out of it, who then just stated the obvious.”

Another Twitter user wrote: “We experienced the prejudices on the run up to and even after Brits voted in the Brexit referendum.

“It’s as blatant now as it was then!”

A third person commented: “BBC’s coverage was dire, I even had to switch to CNN for less bias!”

BBC political editor Laura Kuenssberg has also come under attack after she lashed out at Donald Trump for claiming on Wednesday morning he had already won the election and that there was “massive fraud on our nation”.

BBC news: The broadcaster has previously been accused of bias in its coverage (Image: GETTY)

She had tweeted: “Trump said he has already won and that there is ‘a fraud’ going on.

“Remember, millions of votes have not yet been counted.

“It is just not credible to make that claim, there is no evidence of such a ‘fraud’ and it is incredible such claims being made from the White House.”

“But the comments from the BBC political editor sparked fury and more suggestions of bias form the Corporation.

One person wrote: “BBC Laura K has declared there is absolutely no evidence of any #Fraud in the Presidential Elections, and that’s that.”

Recently, fellow Brexiteer and Tory MP John Redwood accused the BBC of bias against England in favour of Scotland, Wales and Northern Ireland.

In a letter on his website to the BBC’s new director-general Tim Davie, he wrote: “I do not think the BBC reveal party political bias between Labour and the Conservatives. The interviewers are usually rightly tough on both parties.

“There is, however, systematic bias against England, with many voices representing Scotland, Wales and Northern Ireland and liberal reporting of the devolved governments with never any consideration of the views of England where most Licence fee payers live.

“There is no English radio or TV channel to redress the balance, unlike the other nations in the Union which have their own channels.”

Mr Redwood added: “We are endlessly told Scotland voted to stay in the EU but never told England voted decisively to leave.

“The BBC follows the EU agenda of trying to break England into regional and city area governments, whilst leaving Scotland whole despite the anti-Edinburgh tensions in places like the Shetlands and the differences between the Highlands and the main cities.”

BBC bosses recently introduced new guidelines for their journalists’ use of social media, with Mr Davie threatening to remove staff from Twitter if they failed to adhere to the new measures.

During a Parliament select committee session, he said: “Within those guidelines, the enforcement policies will be very clear.

“If they want to work for the BBC, I can ask people, you would suspend their Twitter account, absolutely.”