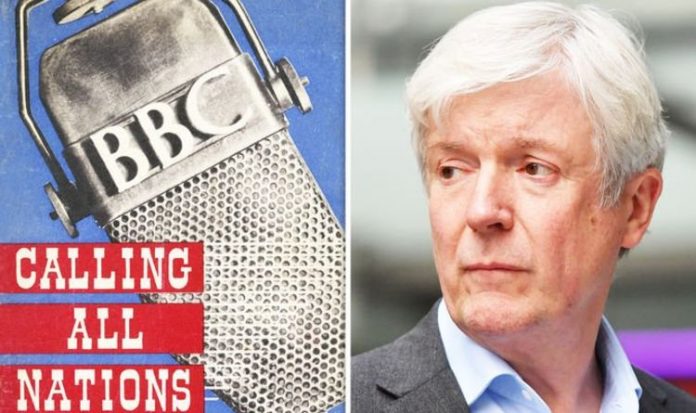 Lord Hall served as director general of the BBC for seven years until August, when he was replaced by Tim Davie. During his tenure, the Royal Charter, which dictates the aims and how much money is allocated to the corporation, was renegotiated and changes were paid to licence fee payments. Lord Hall revealed David Cameron’s Conservative-majority forced the BBC to waive the sum charge to the over-75s during tense negotiations. As of August this year, only those over that age bracket who are on pension credits can claim a free TV licence. During a heated discussion that same month, on BBC Radio 4’s The Media Show podcast, host Amol Rajan accused Lord Hall of having left a “time bomb” beneath the corporation.

The former BBC head claimed the 11-year charter they had negotiated was “really lucky” because it expires in 2027, rather than the predicted maximum of two or three years.

He also managed to ensure that the fee would go up with inflation year-on-year – currently at £157.50 for a colour subscription – which he claimed will put them in a “really strong” position.

Lord felt the corporation would be in an “excellent shape” when it is time to renegotiate, especially considering those “who were coming at us at the time”.

But Mr Rajan disagreed with the former head’s take and stated the “brutal truth” was that it was not as strong as he claimed.

He said: “The fact is at the end of that negotiation, which you led for the BBC, the BBC had a time bomb placed underneath it.

“That time bomb is going-off just as you’re leaving and that’s a bad look isn’t it? That’s an uncomfortable place for you to be and a cynic would say you wouldn’t need to anticipate the aftermath.”

Lord Hall rejected the claim that he deliberately left ahead of future negotiations and stated that he “absolutely wanted to deal with the reforms to the over-75s”.

He continued: “You call it ‘a time bomb’, I say we’ve come to a solution, which is an absolutely fair solution.

“Those that cannot afford to pay for the licence fee don’t have to pay for it – if you are on pension credit.

“Those that can afford to pay the licence fee are paying for it, so it’s quite the reverse from ‘a time bomb’ – that’s actually a very fair way of looking for payments.”

It’s estimated that around three million people over the age of 75 risked losing their free TV licence earlier this year.

Nearly 600,000 pensions were urged to sign-up for benefits to qualify for the fee waiver – and, if they all did, it would cost the taxpayer around £1.8billion, according to an August report by The Telegraph.

Mr Rajan claimed that the decision to scrap free TV licences for the over-75 left many in a “very, very painful position” and many would “lose the BBC from their lives”.

He continued: “People in this country who love the BBC and have supported the BBC for years… have got used to having it for free.

“Why are you now actively hurting those people and say, ‘You have to pay for something you used to get for free?’”

Lord Hall blamed Mr Cameron’s government for forcing the over-75s on them and also previous charter agreements – decisions that led the BBC to fight for its survival.

Mr Rajan stated that the corporation was a “marginal call” for many households and some would have to lose it to “spend money on eating and heating” instead.

“That’s important but i also want to make sure that they are getting the sort of services and sort of programmes that make it feel it’s worthwhile.

“That’s the way of telling them they are getting good value from what they are paying.”