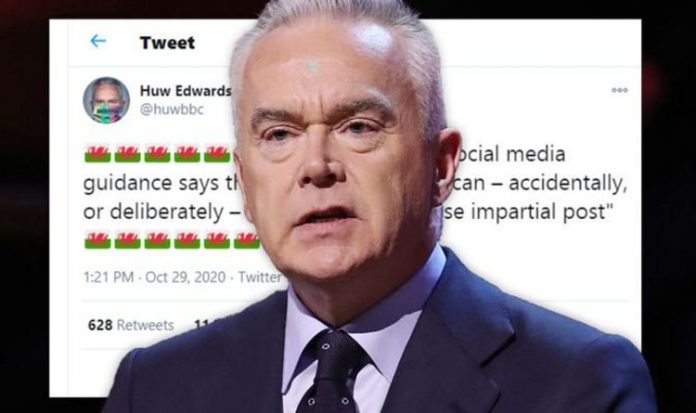 This afternoon the BBC outlined a major clampdown on the use of social media for all its employees. All those working for the taxpayer-funded service will be told not to “express a personal opinion on matters of public policy, politics, or controversial subjects”. The major reforms also caution against the use of emojis – such as animated facial expressions – on social media amid fears they could distort the meaning of a post.

Mr Edwards, 59, has taken aim at the BBC for its tough stance on the use of emojis in a light-hearted post on his personal Twitter account.

In a message to his 100,000-plus followers, the BBC News anchor highlighted the new guidance along with 17 flags of his native Wales.

In between the 17-flag emojis, he wrote: “The BBC’s new social media guidance says that the ‘use of emojis can – accidentally, or deliberately – undercut an otherwise impartial post’.”

The new guidance on social media will apply to staff whether they are using online platforms professionally or personally.

On all social media platforms, guidance has been issued on avoiding bias through a number of avenues, including via follows, likes and shares.

The guidance says: “Use of emojis can – accidentally, or deliberately – undercut an otherwise impartial post.”

It adds: “Avoid ‘virtue signalling’ – retweets, likes or joining online campaigns to indicate a personal view, no matter how apparently worthy the cause.”

A stronger emphasis has been placed on staff members who have a greater public profile.

The guidance states: “Do remember that your personal brand on social media is always secondary to your responsibility to the BBC.”

It adds: “Do not be drawn into ill-tempered exchanges, or exchanges that will reflect badly on you, or the BBC.

“Do not post when your judgment may be impaired. Never use your BBC status to seek personal gain or pursue personal campaigns.”

Speaking to staff at the BBC’s Cardiff office in September, Mr Davie said: “If you want to be an opinionated columnist or a partisan campaigner on social media then that is a valid choice, but you should not be working at the BBC.”

He added: “Our research shows that too many perceive us to be shaped by a particular perspective.”