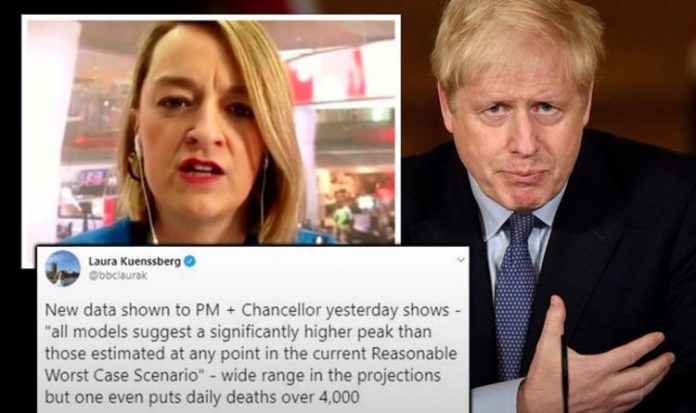 Mr Johnson introduced the Government’s new three-tier lockdown system earlier this month as coronavirus cases throughout the country began to spiral out of control. Several regions of England have quickly been placed into Tier 3 – the highest alert level – with around a fifth of the population set to be hit with the toughest restrictions by the start of next week. But scientists are warning the Prime Minister coronavirus is now spreading faster than even their worst predictions.

BBC Political Editor Laura Kuenssberg has revealed Mr Johnson and Chancellor Rishi Sunak has been shown data to fears from scientists, with one model even suggesting new deaths from coronavirus could surge to as high as 4,000 each day.

She warned documents seen by the BBC also suggest hospitals will buckle under the strain of an influx of patients “if nothing done to slow pace of the disease”, while capacity in some parts of England could be full within just two weeks.

Ms Kuenssberg tweeted: “New data shown to PM + Chancellor yesterday shows – “all models suggest a significantly higher peak than those estimated at any point in the current Reasonable Worst Case Scenario” – wide range in the projections but one even puts daily deaths over 4,000.

“Documents we’ve seen also suggest hospitals simply won’t be able to cope with any more patients by Christmas, if nothing done to slow pace of the disease.

“Capacity in some parts of country on course to be used up within a couple of weeks.”

The terrifying new data comes as Mr Johnson considers imposing a new month-long national lockdown in England next week following a warning from experts that coronavirus is spreading faster than their worst-case scenarios.

The devastating pandemic is spreading throughout Britain at pace, where the official death toll of 46,299 is the highest in Europe.

The Prime Minister is expected to address the country on Monday to announce the new measures, which would allow only essential shops and schools, nurseries and universities to remain open.

“And unlike the first wave, where we had a national lockdown which protected huge swathes of society, this outbreak is now running riot across all age groups.”

But a new national lockdown could trigger another huge Conservative Party rebellion who are growing increasingly fearful of the economic, social and health costs of the medical crisis.

READ  Will my area move up a tier? Latest data reveals 25 places at risk of moving up a tier (Reports)

The move would also pile more pressure on Chancellor Rishi Sunak and the Bank of England to increase the already huge financial support that has been provided for the UK economy, which slumped by a record 20 percent in the spring and is struggling to mount a fightback.

On Friday, further terrifying data from the Office for National Statistics (ONS) suggested more than 50,000 people were infected by coronavirus each day in England last week.

The latest ONS Infection Survey has increased from an estimated 35,200 new daily cases to 51,900. Last week, the ONS had said there was evidence of a levelling off in new infections.

Overall, around one in 100 people throughout the country had coronavirus last week.