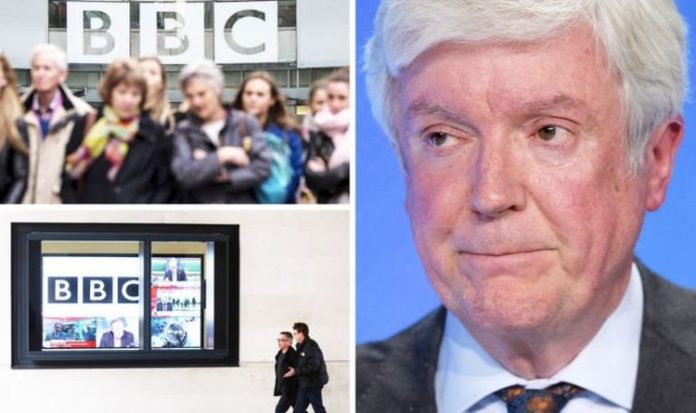 Lord Hall served as head of the BBC for seven years until August this year, when he stepped down and was replaced by Tim Davie. During his tenure, Media Show podcast host Amol Rajan claimed the corporation’s online viewership dropped from around 40 percent to 15 percent of the overall market share. Many fear the decline could spell trouble for the BBC, as larger streaming platforms including Netflix, Amazon Prime and Disney Plus dominate the market. Despite this, the corporation’s annual report, which concluded in March, found that 90 percent of the UK population watched the BBC each week. Mr Davie commented that the public service broadcaster needed to “extract more from online” and “build our commercial income”.

Before he left the corporation, Lord Hall explained that he felt 2020 was “a year of transition” for the broadcaster.

He claimed that their reform to how shows were discovered online had led 49 million people to sign into the BBC.

Lord Hall argued that this development was a “big thing to build on in the future” and a way to keep audiences hooked on their content – which he described as “a very, very good thing”.

He explained in August: “BBC iPlayer is now working and we are promoting it in a way that is not a catch-up service, which [it was] when I came back to the BBC.

“It’s now a destination within its own right and I feel very, very confident that we can build on that in the future and that a corner has been turned.”

Lord Hall admitted that the corporation “can’t compete on scale” with the likes of Netflix and other streaming services.

He continued: “There’s an awful lot of the sense that ‘it’s all over for the old public service broadcasters’ – [but that’s] not so.

“I think there is actually a role and you saw that role in the COVID-19 crisis… bringing people together in big audiences.”

He claimed that the BBC’s “extraordinary education service”, which they “set up from almost zero in two to three weeks”, had led to greater respect from younger audiences.

Lord Hall said: “Now that’s five million people who have the BBC brand absolutely out there, helping them, and I think that will build a connection with that audience for the future, which I think will be really important.”

He believed coronavirus had led more viewers to rely on the service for its news coverage and the development of new talent – the latter was something he felt the BBC had a “big role” to nurture in the future.

Lord Hall said: “As long as we play that properly, I think that this year will be seen as a time when we’ve pivoted from decline in linear audiences to something where you can see the future.”

Despite the threat from streaming giants, he maintained that competition was healthy because “choice is a good thing” – but they were looking to change their relationship with them.

Lord Hall added: “We’ve gone from a point where we can make money to support the licence fee by selling library material to Netflix and to others and making them rich.

“[But] I can tell you what will happen in the next two years – that content will come back to the BBC and you’ll only find that on the BBC.”

He claimed the BBC were forced to license shows, including Peaky Blinders and Line Of Duty, to Netflix and others, to supplement its income.

Lord Hall said: “What do we lose by not having those sales? How do we afford to make sure that we can live without the money coming in from those sales and build iPlayer?

“What I’m convinced of, is that in two, three, four years time there will be one gateway to the BBC it will be through something called BBC iPlayer, the BBC or whatever – and all our content will be there and I think nowhere else.”