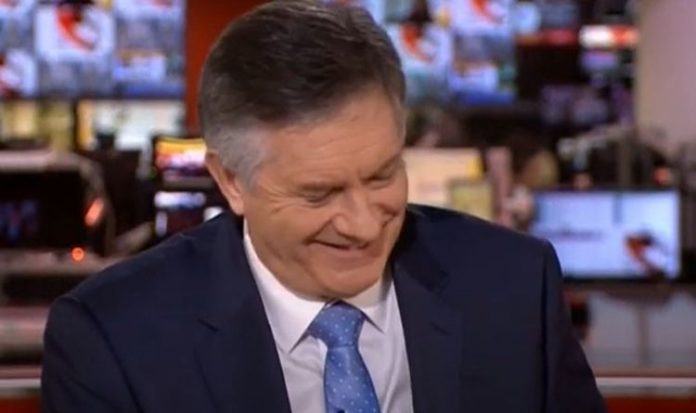 BBC News host Simon McCoy burst into laughter live on-air as he witnessed the “considerable awkwardness” of a problem-plagued Brussels conference. Michael Roth, the German EU Affairs Minister, had joined EU Commission Vice-President Maroš Šefčovič via video link to brief on the latest breakthrough in the Brexit process. The UK and EU have reached an “agreement in principle” on all issues in the Withdrawal Agreement Joint Committee.

However in the middle of his speech, Mr Roth’s sound cut off and his video disappeared from view.

Mr McCoy told BBC viewers: “You may have just picked up the apology there for not being able to establish contact.

“We’ll stay with the awkwardness for a moment because it’s rather entertaining to watch.”

EU spokesperson Sebastian Fischer tried to reach Mr Roth, saying: “We can see you now. State minister, we can see you.

“Would you mind saying something? Okay, but we can’t hear you.”

Mr McCoy joked: “Can you imagine if the actual talks were conducted like this?

“Somebody’s got to make the joke about dialogue of the deaf.”

He added: “I’m not going to point out any symbolism with the lack of communication here.”

Eventually, the link was able to be secured once more.

Mr Roth said: “I can hear you, Sebastian. I feel so privileged and honoured.

“I’m so sorry for the inconvenience and for the technical problems, but it’s not in my hands.”

Both Mr McCoy and BBC Brexit expert, Chris Morris, burst into laughter at the reappearance before the briefing was able to carry on once more.