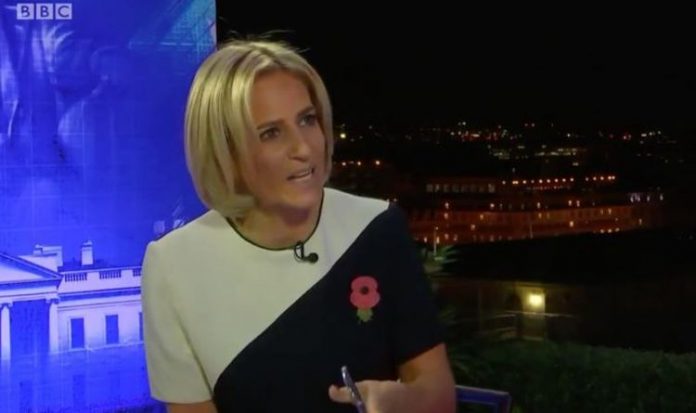 Ms Maitlis grilled Mr Mulvaney on Donald Trump’s controversial response when he was asked whether he would commit to peaceful transfer of power should he lose the election. Speaking at a news conference in September, Mr Trump said “we’re going to have to see what happens” when asked about the subject.

Ms Maitlis interrupted Mr Mulvaney several times as he spoke until he finally gave a concise answer to the question.

Mr Mulvaney said he believed the voting process would take several days and conceded that it could be “messy” and “will take some time.”

He added: “But at the end of the day, we will have an orderly result and an orderly transition or retention of power.”

Following last night’s edition of the programme, some viewers hit out at the BBC over biased coverage and breaching impartiality standards.

One Twitter user said: “The BBC states that staff can’t engage in ‘virtue signalling’ but it fronts it’s US election coverage with a right-wing demagogue, Andrew Neil. If you are going for impartiality, how is this possible?

“Either way, I’m finding somewhere else to watch. This man is an embarrassment.”

Other viewers praised Ms Maitlis’ stern interviewing style, with one Twitter user branding her “the best” in the corporation.

“The longer ministers and the Prime Minister tell us he worked with them, the more angry the response to this scandal is likely to be.

“He was the man, remember, who always got the public mood, he tagged the lazy label of ‘elite’ on those who disagreed. He should understand that public mood. One of fury, contempt, and anguish. He made those who struggled to keep to the rules feel like fools, and has allowed many more to feel like they can flout them.”

Following that edition, BBC was forced to apologise for the presenter’s introductory speech, admitting it did not meet its standards on impartiality.

The corporation outlined last week a new set of rules for BBC staff in a bid to “ensure the highest possible standards of impartiality” on social media.

Staff members who do not abide by the new rules face “possible termination of employment in serious circumstances”.

Former BBC executive and director of communications for No 10 Sir Robbie Gibb described the crackdown as the start of a long process.

He condemned the introduction of new rules, claiming the broadcaster had become too left-leaning politically and must change in order to back its publicly-funded status.

Speaking of the latest social media restrictions, he said: “New BBC staff social media guidelines published today may be the start of reform but I doubt it will end there and nor should it. The BBC can only justify itself as a publicly-funded broadcaster if it provides something its rivals do not – impartial news and entertainment.”