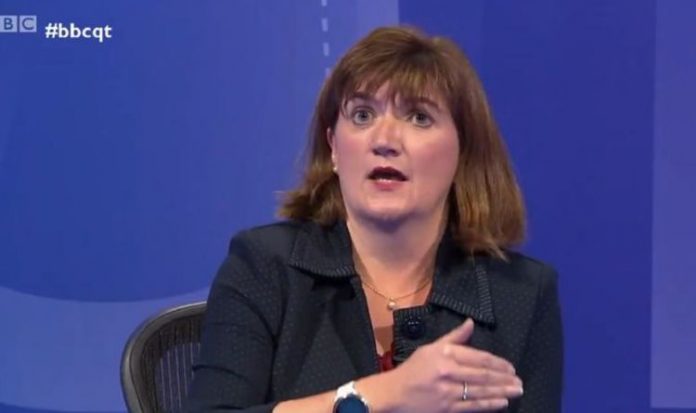 Ms Morgan spoke out on the issue in last night’s episode of BBC Question Time, along with other panellists including Labour’s Bridget Phillipson and economist Joseph Stiglitz. In it, she claimed the British public are no longer “divided about Brexit” with attention focussed instead on whether lockdown measures should be national or regional.

She stated she herself disagreed with the idea of a national lockdown.

“Some people l feel very strongly that another national lockdown is the right thing to do – I totally disagree with that. Other people feel it has to be very much regional.

Nicky Morgan said she was against the idea of a national lockdown (Image: Twitter / @BBCQuestionTime / BBC)

“The great sadness is we’ve spent three years arguing about Brexit, and then just at the time when the country was hopefully going to move forward and tackle children’s outcomes and social care, we are now, all of us, having to deal with this virus.

“I think there is actually far more social solidarity than people realise.”

Ms Morgan, also a former culture secretary, pointed to reports claiming young people were taking lockdown measures seriously, which is having the effect of “beginning to bring the numbers down.”

She added: “And that is what we are going to see, throughout this period of the virus.”

Yesterday, official Government figures showed there had been 21,242 new daily cases of coronavirus – down from the country’s highest ever recorded figure of 26,688 the day before.

She said: “I think what is right is that regional, local authority leaders and national leadership have to work together.

“It’s very difficult, because national leadership will often be able to see things across the country, in a way that inevitably, regional leaders can’t.”

Not all viewers agreed with the Conservative peer. One took to social media to accuse the former education secretary of a “load of waffle that didn’t actually say anything”.

Others disagreed with her assertion that the country was now united over Brexit, with one stating: “Thank goodness we are, at least, a nation united on Brexit. Thanks Nicky, for reassuring us.”

The debate over regional and national lockdown comes after a row between Prime Minister Boris Johnson and Manchester mayor Andy Burnham.

This week, Mr Burnham accused Mr Johnson of having walked away from negotiations about a support package for Manchester businesses.

Later that day, the Prime Minister announced Manchester would be placed under the highest level of lockdown due to a rise in infections in the North West.

The Prime Minister initially did not state how much business support the region would get, although it was later revealed to be £60 million.

This is down by £5 million from the initial demands by Manchester council leaders.