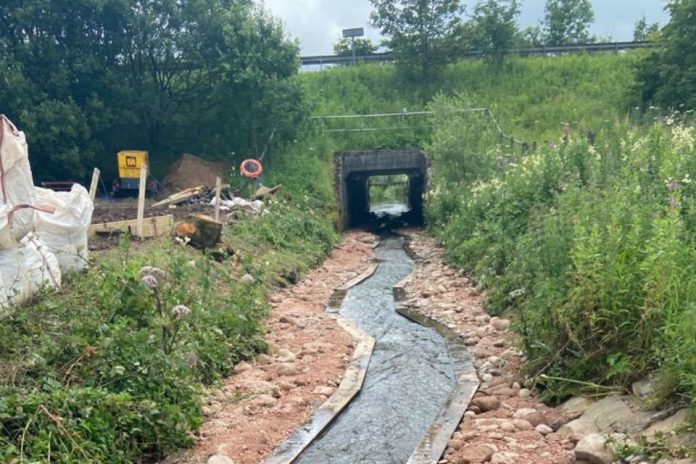 As part of its commitment to reduce the impact of its roads on the environment, Highways England has remodelled the culvert which helps Skitwath Beck at Penruddock, about six miles from Penrith, flow under the busy A66.

The work was completed in July and will make it easier for fish like brown trout, eels and even Atlantic salmon to travel through the culvert – especially important during the autumn spawning season for salmon and trout when they need to travel upstream to lay eggs.

This is a small but important project which will help support aquatic biodiversity at a location right along on the A66.

It also underlines our commitment to reducing the impact of our roads on the environment – in this case by modifying a structure originally provided during the construction of the road.

As part of the modifications, which took a month to complete, a meandering two stage channel was fitted to the culvert base by bolting timbers to the concrete and backfilling the sides with gravel. Stones were also fixed to the floor of the low flow channel to further break up the flow and provide refuge for juvenile fish making their way upstream. New water gates, known locally as hecks, and fences were replaced.

An innovative design was used so that as many river dwelling species as possible, including otters and eels, could benefit from the improvement. It includes measures to reduce the speed of the flowing water and make it easier for more fish to move upstream but also provides multiple depths and roughened surfaces through the culvert giving a wider variety of species the capability of passing through the culvert.

The purpose of this particular project was to enable fish to migrate through the culvert and access more habitat upstream. The addition of natural features in the culvert benefits fish populations and the overall ‘health’ of the watercourse.

The improvement to Skitwath culvert is welcomed and complements other community work underway to improve natural habitat along the beck and the wider Ullswater catchment such as installing fencing to protect river banks and tree planting.

Although not the first in the region, the fish easement is the first to be provided from a national five-year programme of special ‘designated funds’ – worth £936 million between 2020 and 2025 – to improve the environment along roads. The money is designed to secure a better deal for pedestrians, cyclists, and horse riders, tackle air and noise pollution and look at innovative ways of delivering a better strategic road network for everyone.

In September, Highways England’s staff in the North West marked the delivery of the first five years of designated funds environmental improvements with the completion of layby and other improvements in Cumbria.