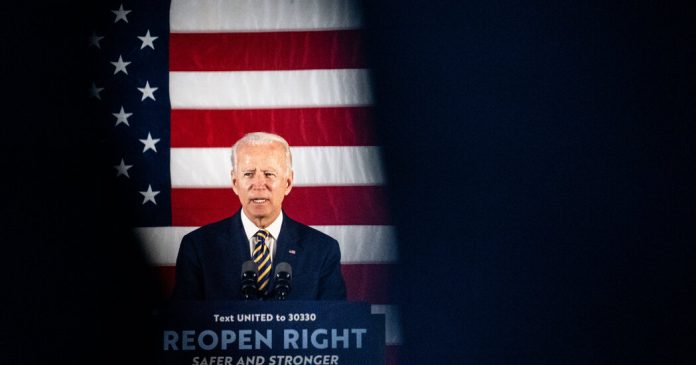 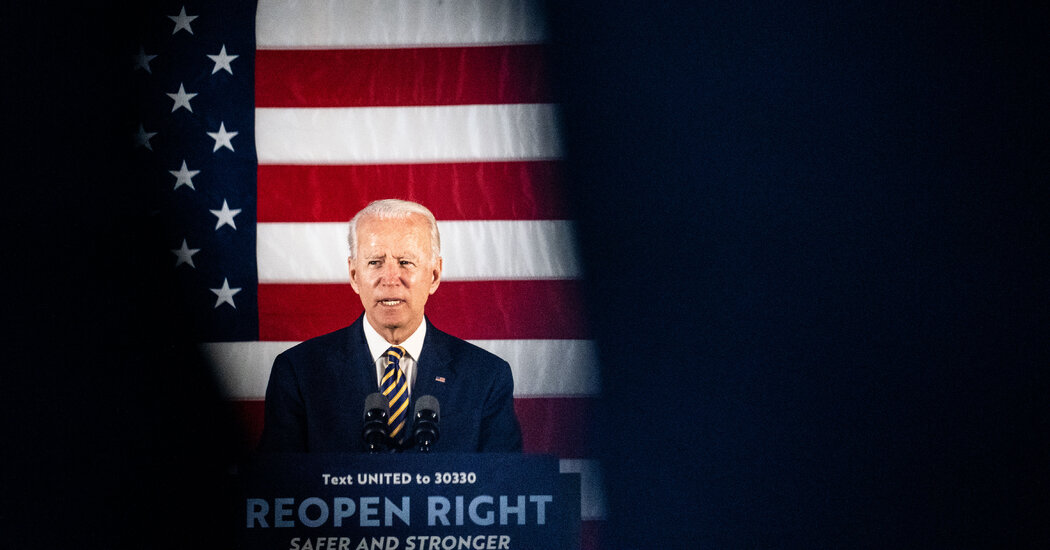 WASHINGTON — It was one of the few issues on which President Barack Obama and Vice President Joseph R. Biden Jr. disagreed — how far to go in limiting the influence of lobbyists in government.

The vice president privately complained that his boss’s effort to slam shut the revolving door between K Street and the administration would deprive it of experienced talent, and he bristled when Mr. Obama’s aides tried to block him from hiring a well-connected Washington operator who had lobbied for pharmaceutical and insurance companies, credit agencies and others.

That puts Mr. Biden at odds with powerful elements of his party’s liberal base. Increasingly, they are expressing concern that the military contractors, Wall Street banks and other major corporations that paid members of Mr. Biden’s inner circle while they were out of government could hold disproportionate power in a Biden administration.

Politically, it could limit Mr. Biden’s ability to cast himself as the antidote to the anything-goes access peddling that has proliferated in President Trump’s administration. Under Mr. Trump, lobbyists and campaign donors have not only enjoyed access to the highest levels of the administration, but have been tapped to lead cabinet departments and have exerted remarkable influence over policies of intense interest to their former employers.

“It’s worrisome, broadly speaking, that a Biden administration could end up abiding by the unfortunate bipartisan norms of putting people in posts where they oversee industries or employers they just left,” said David Segal, co-founder of the liberal group Demand Progress.

His organization was among those that sent a letter to the Biden and Trump campaigns this week asking them not to appoint anyone to senior administration positions overseeing interests they served in the private sector. The letter called out Mr. Trump’s administration for taking that dynamic “to new extremes,” but Mr. Segal added that Mr. Biden’s orbit includes “some folks with troubling track records.”

Mr. Biden has pledged to, if elected, “expand on and codify” the Obama administration lobbying executive order — the same policy he had privately complained about. That plan barred lobbyists from going to work for agencies they had tried to influence within the previous two years, and barred departing officials from lobbying until the end of the administration.

With scrutiny intensifying, some Biden allies are now distancing themselves from their corporate work to better position themselves for official roles with the campaign, transition team or in a potential Biden administration.

Andrew Bates, a spokesman for Mr. Biden’s campaign, said the former vice president’s ethics proposal would be “the most ambitious” of “any administration in American history.”

Mr. Bates said Mr. Biden was “deeply proud” of the ethics policies enacted in the Obama administration, and of his work in the Senate before that “to curtail the influence of lobbyists, money and special interests in government.”

But after eight years as vice president and decades in the Senate, Mr. Biden maintains extensive ties to Washington’s permanent political class of policy and political experts who move between government and private sector positions.

Mr. Ricchetti spent years as a registered lobbyist, and through a company called Ricchetti Consulting Group, is being paid by both the Biden campaign and AT&T, his only corporate client over the last nine years. Anita Dunn, Mr. Biden’s chief campaign strategist, was also still doing work for AT&T last month.

As of Saturday Ms. Dunn is taking “an official leave” from her firm, which had been paid millions in recent years to help an airline advocacy group, while also providing communications advice to an Israeli spyware firm and the fugitive Nissan executive Carlos Ghosn, for whom the firm had been registered to lobby. It ended all those client relationships in the past year.

None of these advisers are registered as lobbyists, reflecting a trend in which major corporate and foreign players hire former officials as consultants, or as legal counsel, allowing them to use their connections and expertise, while avoiding the notoriety and disclosure requirements that come with formal lobbying. This phenomenon was exacerbated by Mr. Obama’s lobbying policy

Mr. Biden’s more liberal challengers for the Democratic presidential nomination, Senators Bernie Sanders of Vermont and Elizabeth Warren of Massachusetts, both campaigned against K Street, in part, to differentiate themselves from the candidate they now support.

Ms. Warren proposed a plan that would expand the definition of lobbying to include consultants and lawyers who try to influence government, while barring corporate lobbyists from joining the government for six years. Supporters of Mr. Sanders and Ms. Warren are pushing Mr. Biden’s team to go further than he has on those issues.

Mr. Ricchetti — a self-effacing fixer likely to occupy a top position if Mr. Biden is elected — personifies the prevalence of influence industry veterans in Mr. Biden’s orbit that concerns progressives.

He rose to prominence as a liaison to the Senate under President Bill Clinton. He left the White House in 1995 and opened a lobbying shop where he specialized in health care, with a goal, a person close to him said, of getting back into government once he had set up his family financially.

He was recruited to return to the White House in 1998 by the then-White House chief of staff, John D. Podesta. Mr. Ricchetti sold his firm to Mr. Podesta’s brother Tony, until recently one of the town’s best-known lobbyists.

When Mr. Ricchetti backed Hillary Clinton’s 2008 presidential campaign, aides to her rival for the Democratic nomination, Mr. Obama, seized on Mr. Ricchetti’s $120,000-a-year contract with General Motors. The Obama campaign connected his work to an $8 million earmark Mrs. Clinton secured for the company’s New York operations as a senator, a claim Mr. Ricchetti has denied.

But Mr. Ricchetti, whose discursive and regular-guy style mirrors Mr. Biden’s, remained persona non grata in the Obama White House even after he had satisfied the two-year lobbying cooling-off period required by Mr. Obama’s policy. When Mr. Biden settled on Mr. Ricchetti to help run his office in late 2011, the White House aides Jim Messina and David Plouffe flatly rejected the idea, according to people close to the situation.

A short, intense scrap ensued, ending only when Mr. Obama gave into Mr. Biden’s argument that he had the “right” to pick his own top deputy, several former aides recalled.

Mr. Ricchetti was hired and by late 2013 was officially appointed Mr. Biden’s chief of staff. Over the next few years, he essentially took control of Mr. Biden’s post-presidential life, setting up a network of nonprofits and academic institutions that would serve as a base of operations, negotiating the former vice president’s lucrative book deal, and, most important, helping to set up the initial structure of the 2020 campaign, according to aides and Biden associates.

While the campaign’s internal policy allows consultants like Mr. Ricchetti to continue receiving outside income from approved sources like his consulting arrangement with AT&T, some of Mr. Biden’s top advisers have begun leaving the influence industry to join the campaign, and possibly a future administration.

Jake Sullivan, who has been helping to develop the Biden campaign’s policy positions and moderating virtual fund-raising events, resigned this year from a job at the consulting firm Macro Advisory Partners. At the firm, he had worked with the ride-hailing company Uber to try to pre-empt an effort in California to classify the company’s drivers as full-time employees.

On Saturday, Antony J. Blinken, a deputy secretary of state in the Obama administration who is running Mr. Biden’s foreign policy operation, joined the campaign full time and took an unpaid leave of absence from his role as a managing partner in WestExec Advisors, a firm he co-founded with Ms. Flournoy.

Early in the Trump administration, the firm had been paid $10,000-a-month for Mr. Keyak’s help waging a public affairs campaign against the Gulf state of Qatar by Elliott Broidy, a Republican donor who owns a defense consulting firm. Federal investigators have since looked into whether that campaign violated foreign lobbying laws, but Mr. Keyak has not been interviewed by prosecutors, the Biden campaign said.

Some Democrats argue a Biden administration would be wise not to wall itself off from people with both government and private sector experience.

“We can’t all go to think tanks, or into academia, and you wouldn’t want to fill the government entirely with people who came from ivory tower institutions that are detached from the mechanics of Washington,” said James P. Rubin, who had served as a foreign policy adviser to Mr. Biden in the Senate and then moved to the State Department in the 1990s before becoming a registered lobbyist.

In an effort to ease potential hurdles to joining a Biden administration, Mr. Rubin in recent weeks terminated his lobbying registrations for a range of clients.

Mr. Rubin argued that Mr. Biden’s decades of experience in government meant aides would be less able to shape his worldview, but he nonetheless contrasted the years of public policy experience inside and outside government of many Biden advisers to the relatively less experienced set of advisers around Mr. Trump.

“I’d like to think that now we have to acknowledge that having expertise is good,” he said.