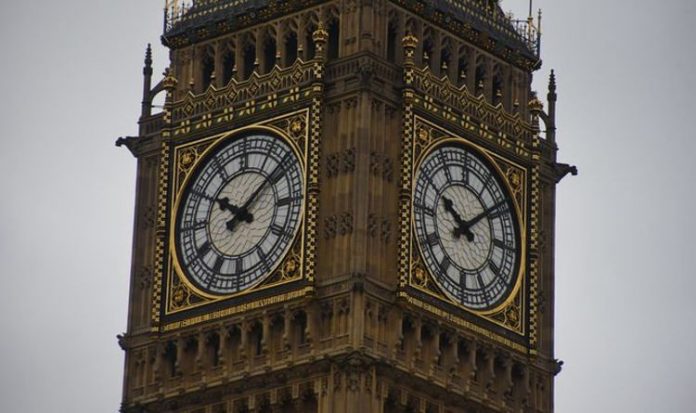 Elizabeth Tower underwent renovations in 2017 as the iconic landmark suffered extensive wear and tear over the years. Repairs on the tower ended up totalling at an astonishing £79.7 million due to newly discovered faults. But Big Ben’s scaffolding will start being removed this week, with onlookers getting a clear view of the clock face over the coming days.

Scaffolding will take six weeks to remove fully, but the top of the tower will become visible for the first time since renovations began.

Renovations will continue on the rest of Elizabeth Tower over that period.

After the scaffolding is removed, 3,433 repaired cast iron roof tiles will be exposed.

The tower will also see its crumbling stone work and leaks fixed throughout the end of the renovations.

Sir Lindsay Hoyle. Speaker of the House of Commons, hailed the return of the iconic clock face.

He added: “Like everyone else, I have been looking forward to seeing the scaffolding come down on Elizabeth Tower – so the unveiling of the roof will be a memorable moment.

“We could all do with some good news in this COVID world, so it is very exciting to actually see some more of this great icon.

“I am hoping the conservation work that has taken place on the tower – an important symbol of our democracy – will assure its place in London’s skyline for generations to come.”

Ian Ailles, director general of the House of Commons, said in February the restoration “had been more complex than we could have anticipated”.

A statement from the House of Commons Commission added at the time: “It is very frustrating to learn that the Elizabeth Tower project requires yet more funding, having agreed an extra £32m in 2017.

“We have requested more detailed information about the lessons learned from this experience – as well as assurances that more robust estimates are prepared for works of this nature in the future.”

The last significant repairs carried out on the tower took place between 1983 and 1985.

While the clock face will make its return to the public eye, the tower will not ring to mark the occasion.

The tower’s bell is supposed to lay dormant until 2021, despite public outcry for the tower to ring out for national events.

The lone exceptions to this are New Year’s Eve and Remembrance Sunday.

Part of the renovations to the tower will include a lift for ease of access.