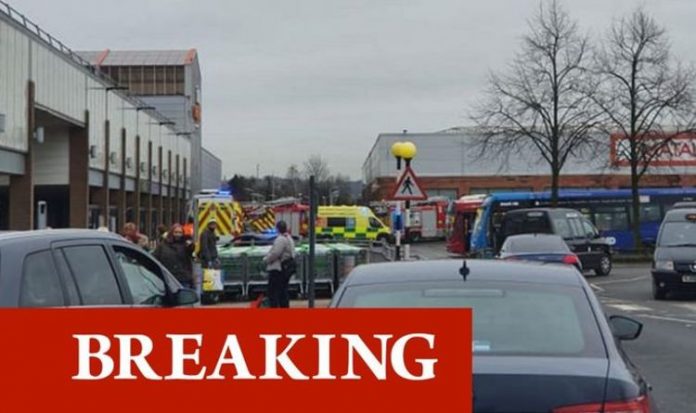 Firefighters, police and ambulance crews were called to the Brierley Hill shopping centre just before noon. West Midlands Police has confirmed officers rushed to the busy shopping centre after a “substance” was thrown at people near the bus station.

The police has said an investigation remains ongoing and has appealed for anyone with information to come forward.

A bomb squad were also at the scene in Wolverhampton after amid fears of a suspected chemical attack.

A spokesman for West Midlands Police said: “We were called to the Merry Hill shopping centre in Brierley Hill just before 12pm this afternoon after a substance was thrown at people near the bus station.

“Fortunately, there are no reported injuries and enquiries are now under way to find out what the substance was.”

A spokesman for West Midlands Ambulance Service said: “We were called at 11.57am to reports of a patient who had had an unknown substance thrown at them near to the bus station at Merry Hill shopping centre.

“One ambulance attended the scene.

“However, it became apparent the patient did not require treatment from the ambulance service and we were stood down.”

Intu Merry Hill has confirmed the shopping centre remains open following the incident and has issued an apology to customers.

A spokesman said: “Police were called to a minor incident that happened outside the centre earlier today.

“Emergency services were in attendance and responded as a precaution.

“The centre remains open as usual and we apologise to our shoppers for any inconvenience caused.”