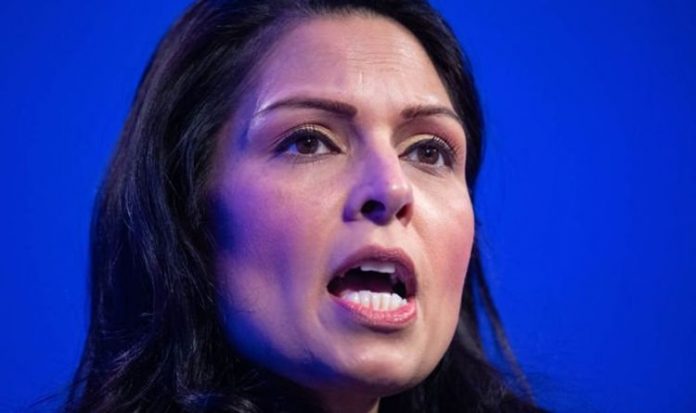 Ms Patel has written to Martin Hewitt, chair of the National Police Chiefs’ Council while the head of the College of Policing, Mike Cunningham, has backed the Police Federation campaign urging forces to be “proactive” in releasing footage. The Home Secretary warned the actions of officers are “deliberately misrepresented” in videos posted on social media and this could undermine trust in our 999 heroes.

Police chiefs have condemned the “trial by social media” of officers after a spate of high-profile incidents.

One of the country’s most senior police officers has said forces should not release footage from police body-worn video cameras (BWV) as it may make them “look bad”.

Met Police Deputy Commissioner Sir Steve House said showing some of the tactics police deploy might have an adverse impact on public attitudes.

Sir Steve said: “The increasingly routine trial by social media is unfair and damaging to individual officers and has the potential to undermine the role our communities need us to do to protect them and keep them safe from violence.”

In a letter seen by the Daily Express, Ms Patel told chiefs that ministers must do “whatever we can to protect them when doing their jobs”.

She wrote: “It is in this context that I am expressing my support for the Police Federation’s recent campaign to protect officers from unfair criticism via social media.

“Decisions around the release of such footage are, of course, operational matters for individual chiefs and must be taken on a case-by-case basis with due consideration of the relevant legal frameworks.

“Nonetheless, I hope that guidance will encourage forces to consider the welfare of officers in these situations and, where release of BWV footage is not appropriate, outline alternative options and good practice.

“I would encourage forces to be proactive in considering where BWV footage can be released to demonstrate the good work officers do and to show that selective footage can be misleading.”

In her letter to Mr Hewitt, she added: “Increasingly we find footage of police interactions being shared across various platforms and used as the basis to criticise the actions of the officers involved.

“Often those commenting on the footage online from their homes have little understanding of the reality of a specific situation, or the pressures of policing.

“But, worse than this, in some cases the actions of officers are deliberately misrepresented and footage edited to support this false narrative.

“This has a corrosive impact on the welfare of the officers involved and on public confidence more broadly.” But Sir Steve, in his address to the Police Superintendents’ Association, said: “Many of the tactics that we use for officer safety, and are trained, frankly look bad.

“One officer cannot restrain a violent individual – it can take four or five officers.”

Essex Police released body-worn footage of an officer vaulting a wall while chasing down and catching a teenage suspect fleeing after being spotted with a knife. The chase ended in a field when the suspect stopped and gave up.