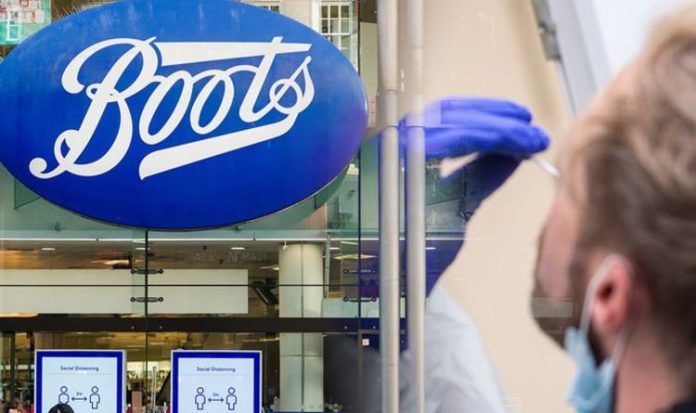 Boots has launched a 48-hour testing service across 10 stores in London, Birmingham, Manchester, Edinburgh and Glasgow, and it plans to extend this to more than 50 outlets over the country. Managing Director of Boots UK, Seb James, said the new tests aim to “ease pressure” off the NHS and the Government. Mr James said the new tests are for people who don’t have Covid symptoms.

How much does the Boots test cost?

The LumiraDX swab tests will cost £120 and will be available across selected stores in the next few weeks.

The tests are not yet accepted by airlines that require a negative coronavirus test before allowing passengers to board.

This is because the results are processes through an in-store machine as opposed to using a registered laboratory.

There are hopes that the tests will be accepted by airlines in time, however, according to Mr James.

The accuracy of the new 48-hour test is more than 99 percent, while the 12-minute test is between 97 and 98 percent accurate.

Mr James said that the test was “slightly less accurate (than the 48 hour test) but not so much that it matters”.

He added: “It’s a miracle of technology and I think it’s just the beginning of how technology is going to help us solve this crisis.”

Mr James also said he hoped the price could be lowered in future as more people get tested and new technology makes the process cheaper.

He added: “We do not have any plans for any further job cuts right now.”

The Chief Executive said in a statement: “Boots has supported the Government’s COVID-19 testing programme from the very start and offering this new in-store service is the next sep in our efforts to fiat against the pandemic.

“We hope that by offering this testing option in local community stores, Boots can help ease the pressure on the NHS and the Government by providing additional access to testing and crucial reassurances for people across the UK.

“As part of the UK high street for over 170 years, Boots is proud to serve on the front line alongside the NHS and we will continue to do our part to support the nation’s healthcare needs during this challenging time and beyond.”

Honorary associate professor in respiratory sciences and clinical virologist at the University of Leicester Dr Julian Tang said these types of tests “have been used for years for other respiratory viruses like influenza and RSV”.

Dr Tang added: “They perform better on samples with high viral loads – such as those taken early in infection, and in children who usually shed more of these viruses for longer.

“Just based on the data supplied in their LumiraDx manufacturer product specification, its performance appears to be as good if not better than other similar rapid antigen tests for other respiratory viruses like influenza and RSV – at least on paper.

“However, some additional evaluations should really be performed in a real life, in store situation to confirm this level of performance.

“This is normal for any newly introduced laboratory diagnostic kit.”