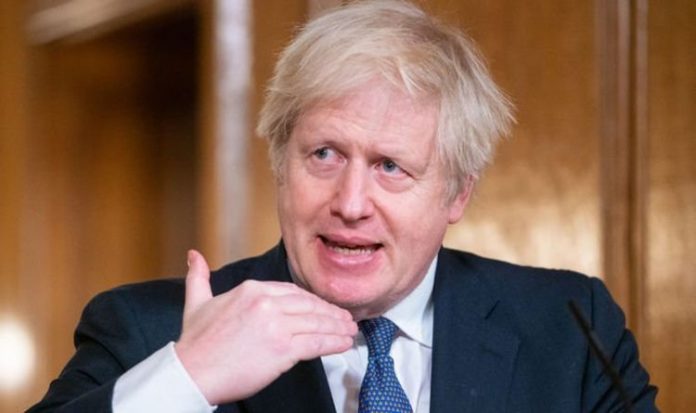 People arriving in the UK will have to show they have tested negative for the virus, fill in a “locator” form and quarantine for 10 days. The Prime Minister said all 63 travel corridors will be suspended from 4am on Monday. They were introduced last summer to allow people travelling from countries with low numbers of Covid cases to come to the UK without having to quarantine on arrival.

At yesterday’s No10 press conference, Chief Scientific Adviser Sir Patrick Vallance warned there are likely to be many variants of Covid-19 across the world.

But only countries with advanced testing regimes have detected them so far.

This means passengers coming to the UK must show proof of a negative test in the previous 72 hours. Then they must quarantine for 10 days, unless they choose to have another Covid test after five days and the result comes back negative.

The locator form is filled in on arrival and includes passengers’ passport details, travel details, including times and dates, and the address where they will stay in the UK.

Travellers from South America, Portugal, some of central America and South Africa had already been barred from coming to the UK.

Mr Johnson said yesterday: “It’s precisely because we have the hope of that vaccine and the risk of new strains coming from overseas that we must take additional steps to stop those strains from entering the country. Yesterday we said that we’re banning flights from South America and Portugal, and, to protect us against the risk from as-yet-unidentified strains, we will also temporarily close all travel corridors from 4am on Monday.

“Following conversations with the devolved administrations we will act together so this applies to the whole of the UK.”

Mr Johnson added: “At this crucial stage what we can’t have is new variants with unknown qualities coming in from abroad.

“That’s why we’ve set up the system to stop arrivals from places where there are new variants of concern, and set up the extra tough measures that I’ve outlined.”

Travellers from Portugal have been banned from entering the UK because of its strong links to Brazil (Image: Getty)

Transport Secretary Grant Shapps said the rules were being brought in because it was impossible for scientists to predict where new variants may arise.

He tweeted: “Travel Corridors assess public health risk from the original SARS-COV-2, but it’s impossible for the Joint Biosecurity Centre to provide live scientific updates to predict which countries or regions will now originate new variants. Travel Corridors are therefore suspended for now.” The announcement came as Britain stepped up its fight against Covid-19 – with almost 3.3 million vaccines having been given to one in 20 people.

But, with a further 1,280 deaths announced yesterday as well as 55,761 new cases and a record 33,362 patients in hospital, officials are determined to prevent more variants wreaking havoc. It was also revealed yesterday that the global death toll has passed two million. Johns Hopkins University said 2,012,253 people had died as of last night.

Meanwhile, Public Health England confirmed that no cases of the more concerning Brazilian variant had been detected in the UK.

The PM said all 63 travel corridors will be suspended from 4am on Monday (Image: Getty)

But eight cases of another Brazilian variant had been found as of Thursday.

Thirty-five confirmed and 12 probable cases of the South African variant have also been recorded. The ban on all travel corridors comes a day after a ban was imposed on people entering the UK from 15 South American countries and Portugal.

Mr Shapps said that decision had been taken due to fears over a virulent strain of coronavirus which originated in Brazil.

The new rules were welcomed by Tory MP Neil O’Brien, who said: “The countries that have done best during the crisis – Taiwan, Korea, Japan, Australia, New Zealand – have tough health controls at the border.

“We are making good progress on vaccination – the fastest in Europe – but this thing is going to bounce around the world mutating.”

Labour leader Sir Keir Starmer welcomed the decision to suspend travel corridors but criticised the Government for being slow to act.

He said: “I think many people will say, ‘Why on earth didn’t this happen before?’

“Many countries have taken this step before we did. Right step, but slow again.

“We are still in a very serious situation, the infection rates are going up, the NHS is really struggling. Therefore everybody has to comply with the Government guidance.”

He also called for greater Government support for the aviation sector following the latest restrictions. It was revealed yesterday that Heathrow’s passenger numbers fell from 81 million in 2019 to 22.1 million last year – a 73 percent drop.

Grant Shapps says it is impossible for scientists to predict where new variants may arise (Image: Getty)

Sir Keir said of the stricken industry: “They have been hit time and time again.

“They were promised support months ago but that package hasn’t been put in place.

“The Government now needs to urgently address that.”

However, scientists say the most worrying of the Brazilian variants is not in the UK.

It was detected in four travellers who flew from the Brazilian city of Manaus to Japan last week. That variant, known as P.1, led to the UK’s ban on travellers from South America and Portugal.

At least two nurses in Brazil have been infected with another variant, P.2, despite catching and beating Covid in the spring.

The ban also applies to Portugal, because of its strong links to Brazil; the former Portuguese colony of Cape Verde off the coast of west Africa; and Panama in central America. Much of southern Africa is also banned amid fears over how easily a variant of the virus from South Africa can be transmitted.