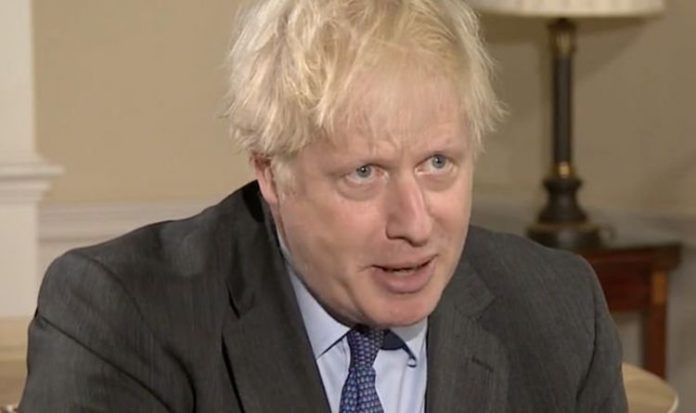 Boris Johnson triggered a heated backlash last night after he suggested people could ignore his Government’s own advice as long as “they use common sense”. The Prime Minister was accused of confusing the country after he said people could opt not to follow the advice that comes as part of local coronavirus restrictions, “provided people show common sense”. Earlier this week, a YouGov poll revealed that 64 percent of Britons find the Government’s guidance difficult to follow.

In the interview, ITV’s Hannah Miller raised a question from a confused viewer: “Jane from Wiral wants to know if she can meet her daughter for a dog walk in the park?”

Mr Johnson said: “She can certainly meet her daughter for a dog walk as long as she observes social distancing.”

Ms Miller responded: “Can she? It’s not illegal but it’s against the advice that was published on the Government website yesterday because she lives in Merseyside.”

The Prime Minister followed this up: “Provided people show common sense and look on the local websites, that is the best way to get the virus down.”

Ms Miller tried to clear up the confusion: “If it’s against the advice, are you saying that advice doesn’t really count for anything?

“That people should ignore advice as long as they follow the law?”

Mr Johnson said that people should “apply their common sense, follow the rules on social distancing and follow the law”.

The ITV Granada reporter brought up recent confusion around restrictions in Greater Manchester, where there are different guidelines in place across the region.

One viewer tweeted: “This is an absolute car crash for Boris Johnson who (a) clearly has no idea and (b) seems to be suggesting people can ignore government advice if they use their ‘common sense’.”

Howevers, others criticised the interview itself for the use of ‘gotcha’ questions and interruptions.

A recent YouGov poll carried out on Wednesday found 31 percent of Britons find the government’s guidance “very unclear”, with 33 percent seeing it as “fairly unclear”.

Only five percent of the 2,109 adults surveyed said it is “very clear”, with 27 percent finding it “fairly clear”.