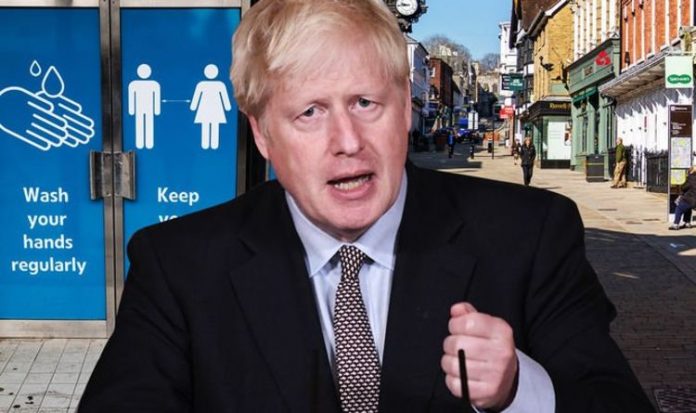 The Government is today expected to announce that “high” or “very high” Covid-19 alert levels will be imposed on almost all of England when the national lockdown ends next Wednesday. It will mean the ban on indoor household mixing is to remain in force across much of the country while pubs and restaurants will only be allowed to offer takeaway service in many areas.

But the Prime Minister last night told a private meeting of Tory backbenchers that mass coronavirus and testing should allow the restrictions to be eased.

He sought to provide reassurance after more than 100 his party’s MPs raised concerns about the new toughened-up three tier regime being prepared by ministers.

Mr Johnson told the meeting of the 1922 Committee of backbench Tories: “Between now and Easter we will use these two utensils – mass testing and the vaccine – steadily to come out of the measures we are going to go in to.

“I see us steadily making progress over the next four months.

“They will really erode the ability of the virus to do damage to our population.”

Mr Johnson compared the gradual easing of local restrictions to “steadily starting to insert graphite rods into a nuclear reactor.”

He added: “By gradually finding more and more people and testing them and also vaccinating the vulnerable it will make a huge difference over the next few months.”

Members of the Covid Recovery Group of Tory MPs sceptical about lockdown measures were alarmed yesterday when an Office for Budget Responsibility document released for Rishi Sunak’s Spending Review appeared to confirm that most of England will be put under the top two Covid Alert tiers of restriction for months.

Boris Johnson said the restrictions will be loosened over the next four months (Image: GETTY)

It showed that economic forecasts used by the Chancellor for the spending plans assumed most of the country will be under the two tiers.

Tory MPs at the meeting demanded a full analysis of the impact before they are asked to vote on the measures in the Commons next week.

Former chief whip Mark Harper said in a text message to fellow MPs: “It is essential that the Government sets out clearly the details behind its Covid-19 Winter Plan before we’re asked to vote on it next week.”

Health Secretary Matt Hancock will set out details of the new tier regime in the Commons today.

Officials insist the decisions about which areas are placed under the three tiers will be based on recommendations from regional and national public health experts.

A series of criteria for the decision will include local infection rates, detection rates and pressure on the NHS. If these indicators are not improving, an area may be moved up a tier and if the trajectory improves, the area may move to a lower tier.

READ MORE: What time will we find out what tier we’re in?

England will be split into a new three tier system from next Wednesday (Image: EXPRESS)

Local authorities in areas under Tier Three restrictions will be able to receive rapid turnaround lateral flow tests to help bring down infections and reduce restrictions.

In a message to the public last night ahead of today’s announcement, the Health Secretary said: “Thanks to the hard work and sacrifice made by people up and down the country, we are able to move out of national lockdown and into more targeted local, tiered restrictions.

“I know for those of you faced with tier 3 restrictions this will be a particularly difficult time but I want to reassure you that we’ll be supporting your areas with mass community testing and extra funding.

“By following the rules together we can get out of these tough measures.”

The allocation of alert levels will be reviewed every 14 days with the first review taking place on December 16.

The Government’s Contain Outbreak Management Fund will be extended to provide monthly payments to local authorities facing higher restrictions until the end of the financial year.

At Prime Minister’s Questions in the Commons yesterday, Tory backbencher Andrew challenged Mr Johnson to publish a “full public cost-benefit analysis on its impact on our economy and public health before he introduces anything that will lead to years of economic harm that could end up being worse on people’s lives than the virus itself.”

Mr Johnson replied: “We will of course be setting out an analysis of the health, economic and social impacts of the tiered approach and the data that supports the tiering decisions, as we have done in the past.”

Tory MPs from London yesterday insisted the capital should be put under Tier Two rather than Tier Three restrictions in the announcement today.

Nickie Aiken, MP for the Cities of London and Westminster, said: “I would be extremely disappointed if London is put into Tier 3.

“The near Herculean efforts many restaurants, cafes, casinos and cafes etc have put in place to make their premises Covid secure should be recognised.

The latest coronavirus statistics for the UK (Image: EXPRESS)

“I have seen no data to date to provide the evidence that the capital should enter Tier 3 rather than 2.”

Harrow East Tory MP Bob Blackman said: “We better not be in Tier 3 otherwise it is all but over for Christmas for the hospitality sector. London’s economy would be decimated. A review in mid-December would be far too late.”

Meanwhile, a study yesterday said the previous Tier One restrictions had little impact in England when tried before the current lockdown.

Tier One restrictions were largely inadequate and Tier Two rules were only effective in around half of local authority areas, according to the University of East Anglia study.

Tier Three restrictions seemed to be effective in most areas, the research found.

“They had little impact on transmission and allowed exponential growth in the large majority of authorities such as Kingston upon Hull, until it was moved into Tier 2, and Kings Lynn and West Norfolk.

“We found that the impact in Tier 2 areas was mixed.

“Exponential growth was being seen in about half of authorities so the restrictions were not adequate in those areas.

“However, the infection rate declined in other areas so the restrictions seemed to be enough in some places.

“Tier 3, which barred all indoor household mixing in areas such as Rossendale and South Ribble authorities in Lancashire had the most impact and was effective in most of the authorities in that top tier.”