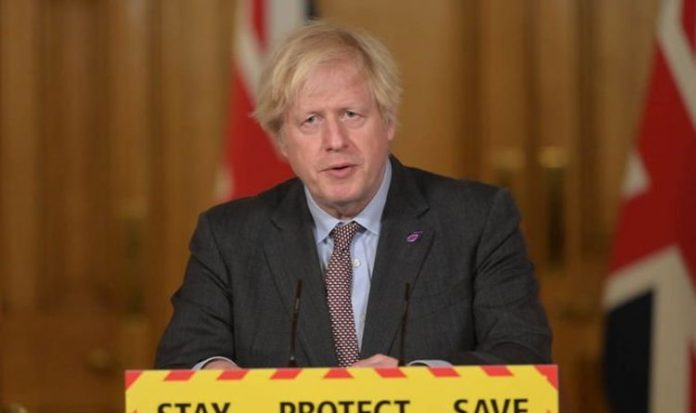 Boris Johnson is due to host a Downing Street press conference this evening after a study into the UK’s Oxford/AstraZeneca vaccine revealed that one dose can reduce transmission of the virus. The finding is a major breakthrough as the vaccine is rolled out, with more than 9 million people having already received the first dose.

The research, which has not yet been peer-reviewed, suggests the jab may reduce transmission by 67 percent and has also shown that the jab offers protection of 76 percent up to 12 weeks after a single dose.

This means the Oxford/AstraZeneca jab could have a greater impact on the pandemic, as each person who is vaccinated will indirectly protect other people as well.

Mr Johnson has described the data as “really encouraging” while Health Secretary Matt Hancock hailed them as “absolutely superb”, and “will help us all to get out of this pandemic”.

He told BBC Breakfast: “We know from earlier trials that the vaccines are safe and effective at protecting the individual.

“We now know that the Oxford vaccine also reduces transmission and that will help us all to get out of this pandemic, frankly, which is why it is such good news that we should welcome.”

However, there is not enough evidence yet on whether the vaccines from Pfizer/BioNtech and Moderna also prevent coronavirus infection and transmission. And while the latest study offers a spark of hope that the end of lockdown may be in sight, we’re still a long way off from lifting restrictions.

The PM previously said the earliest schools could reopen in England was March 8, sparking speculation other lockdown restrictions will not be lifted until later this spring.

But his words have provoked fury from some lockdown sceptics in Parliament who say he must have a “very good reason” for keeping English schools closed for longer than those in Scotland.

Former chief whip Mark Harper, chairman of the Covid Recovery Group, said in a statement: “Covid is a deadly disease, however lockdowns and restrictions cause immense damage to people’s health and livelihoods, and we need to lift them as soon as it is safe to do so.

“The Prime Minister said last week that reopening schools was a ‘national priority’. Now that Scotland has indicated that schools are likely to return from February 22, there needs to be a very good reason for keeping English schools shut for so much longer.

“Once the top four risk groups have been vaccinated by February 15, and protected by March 8, the Government must start easing the restrictions. We’ve got to demonstrate to the public how the good news about the vaccination rollout translates into a return to normal life.”

Following the briefing, the Prime Minister will join in with a “national clap” on Wednesday evening to honour the life of Captain Sir Tom Moore, Downing Street has announced.

Speaking in the House of Commons this afternoon during PMQs, Mr Johnson paid tribute to the World War Two veteran who he says dedicated his life to serving others.

He added: “We all now have the opportunity to show our appreciation for him and all that he stood for and believed in.

“That is why I encourage everyone to join in a national clap for Captain Tom and all those health workers for whom he raised money at 6pm this evening.”