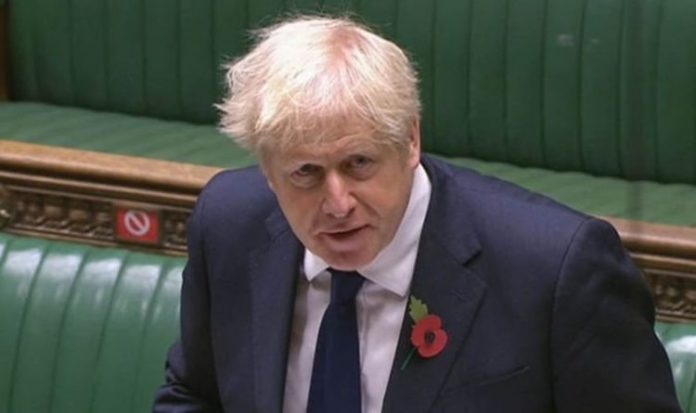 The Prime Minister posted on Twitter that he will now begin self-isolation after the UK’s contact tracing app detected he had met someone who tested positive for the virus. Downing Street confirmed that Mr Johnson was present in a meeting with Tory MPs last week, where one representative was infected. Mr Johnson was struck down with COVID-19 in March during the UK’s first wave of the virus, leaving him hospitalised.

Mr Johnson announced the news on Twitter, and added he feels healthy.

He said: “Today I was notified by NHS Test and Trace that I must self-isolate as I have been in contact with someone who tested positive for COVID-19.

“I have no symptoms, but am following the rules and will be working from No10 as I continue to lead the government’s pandemic response.”

The UK’s self-isolation period after coming into contact with coronavirus is 14 days.

The Prime Minister had to go into self-isolation after a 35 minute meeting with Tory MPs on Thursday.

Lee Anderson, MP for Ashfield, then developed symptoms of the virus in the following days.

The MP posted a picture of him and Mr Johnson not wearing masks and standing closer than 2 meters.

Downing Street stressed that Mr Johnson was “well”, and that the self-isolation period was only a precaution.

A Downing Street announcement ahead of Mr Johnson’s self-isolation post said there would be a “clear signal” of his “ongoing ambitions for the United Kingdom” coming soon.

They added the Prime Minister will be chairing “key Covid meetings” and work with Chancellor of the Exchequer Rishi Sunak to devise the upcoming spending review with an aim to fulfil his promise to “build back better”.

The BBC reported that the Prime Minister also messaged Tory MPs over WhatsApp to inform them of his diagnosis, where he said: “The good news is that NHS Test and Trace continues to improve. The bad news is that I have been pinged!”

“It doesn’t matter that I feel fine – better than ever – or that my body is bursting with antibodies because I have already had the damn thing. The rules are the rules and they are there to stop the spread of the disease.”

Originally, he had mild symptoms, but his condition worsened and was sent to St Thomas’ hospital in central London for treatment.

The Prime Minister returned to work on April 27, saying he was as “fit as a butcher’s dog”.

But Mr Johnson admitted “it could have gone either way” as his condition worsened.

The UK has recorded a further 26,860 cases of the virus on Sunday.

The Office of National Statistics also reported a further 462 deaths in the last 24 hours.

The country is currently in a national lockdown until December 2 to curb the rising cases.