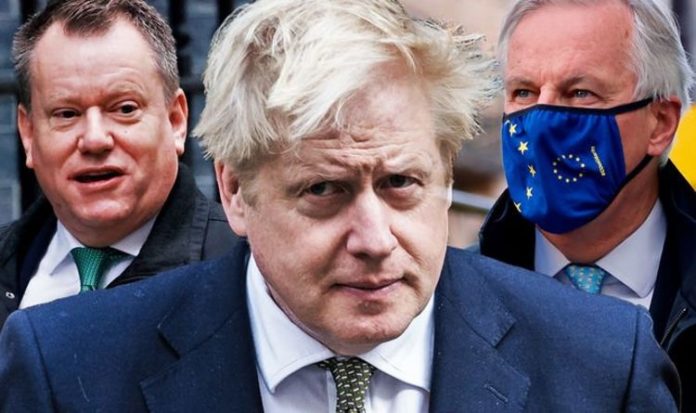 The Prime Minister’s European envoy Lord Frost yesterday admitted crunch negotiations for a UK-EU trade treaty “may not succeed” given refusal by Brussels to recognise the country’s sovereignty over fishing waters, business regulation and industrial policy. And Downing Street officials signalled that Mr Johnson is running out of patience. He is said to be bracing for a no-deal relationship with the EU similar to Australia’s.

A Government source said: “We do need to urgently make progress on these issues or it will end up an Australia-style deal.

“There is momentum and there is a strong desire on both sides to do a deal but is going to be hard work for Lord Frost this week.”

Mr Johnson is gearing up for a showdown with Brussels in the coming days as his Government bounces back from the week of infighting that led to senior adviser Dominic Cummings’s departure from Downing Street.

The Prime Minister will renew his drive to transform the country by making major announcements in the coming days including publishing a 10-point plan for a “green industrial revolution.”

He will also reach out to Tory MPs in the “Blue Wall” northern territories captured from Labour with a meeting with the Northern Research Group of backbenchers today to hear their ideas for regenerating their region.

In a crucial week for the Government, Lord Frost goes head-to-head with his EU counterpart Michel Barnier ahead of a video conference of EU leaders on Thursday seen by both sides as a deadline for progress.

On his arrival in Brussels yesterday for the talks, the peer warned that the talks will fail unless the EU drops demands for continued control over business regulation, state aid to industry and fishing quotas.

In a statement on Twitter, Lord Frost said: “We are working to get a deal, but the only one that’s possible is one that is compatible with our sovereignty and takes back control of our laws, our trade, and our waters. That has been our consistent position from the start and I will not be changing it.

“There has been some progress in a positive direction in recent days.

Brexit news: It is hoped the two sides will break the deadlock this week (Image: PA)

“We also now largely have common draft treaty texts, though significant elements are of course not yet agreed.

“We will work to build on these and get an overall agreement if we can. But we may not succeed.

“Either way, as the Prime Minister Boris Johnson made clear on 16 October, people and businesses must prepare for the change that is coming on 31 December, most of which happens whether there is a deal or not.”

Senior Brexiteer MPs last night backed Lord Frost to dig in against the EU’s attempts to bully the UK.

Former Tory leader Iain Duncan Smith said: “Lord Frost needs to stand firm this week. He is absolutely right to say that we are a sovereign nation and cannot accept anything that leave us being constrained by the EU.

“At the moment, Brussels wants to continue treating us like a member of the EU.

“All we are asking for is the same trade relationship that Canada, South Korea and other countries have with the EU.

“If it wants a deal, the EU has to stop pretending that it can control the UK.”

Andrea Jenkyns, a deputy chairman of the European Research Group of Eurosceptic Tories, said: “Mr Frost’s comments demonstrate that we are in good hands with our negotiators and our government is serious about taking back control and delivering on our promises to the British people.

“We will not  bow down to unreasonable EU demands and we are prepared to walk away, deal or no deal.”

Environment Secretary George Eustice insisted talks with the EU on a future trade deal would not be affected by the departure of Mr Cummings, who masterminded the Vote Leave campaign in the run up to the 2016 EU referendum.

“The negotiations have been led by David Frost from the beginning. He’s got a very talented, experienced team of technical experts around him.

“He’s led these negotiations from the start and obviously remains in place and continues to do so.

“So I don’t actually think the departure of Dominic Cummings makes any impact on the negotiations, since Lord Frost has been leading those,” Mr Eustice said.

Insisting the Government was moving on from the bout of Downing Street squabbling, the Cabinet minister said: “Dominic Cummings is a force of nature. He will do his own thing, I’m sure.

“But look, as far as we’re concerned, there’s obviously been an episode. He’s chosen to leave.

He added:  “I’ve known Dominic Cummings myself for many years. He’s got many great strengths and one of them is winning campaigns.

“And he tends to apply himself in short bursts, short tours of duty, on big strategic changes such as the 2016 referendum result, such as the 2019 general election.

“And he’s very talented at that. But it’s always the Prime Minister’s prerogative who will be their key advisors.”

With his Downing Street team being reshaped, Mr Johnson is set to make key decisions this week including over the scheduled easing of the second coronavirus lockdown next month.

He will also discuss details of Chancellor Rishi Sunak’s spending review to be held next week.

Brexit news: This Thursday is the deadline for a deal (Image: PA)

A No 10 spokesman said: “This Government is determined to improve opportunities for people across the country, regardless of their background or where they live in the UK.

“We were elected on an ambitious manifesto to deliver this agenda, investing in education, skills and our NHS, tackling crime and introducing tougher sentencing for those who commit the most heinous crimes, as well as concluding our trade negotiations with the EU.

“Our agenda remains focused on this and we will never veer off this course, as we build back better from the coronavirus pandemic.”