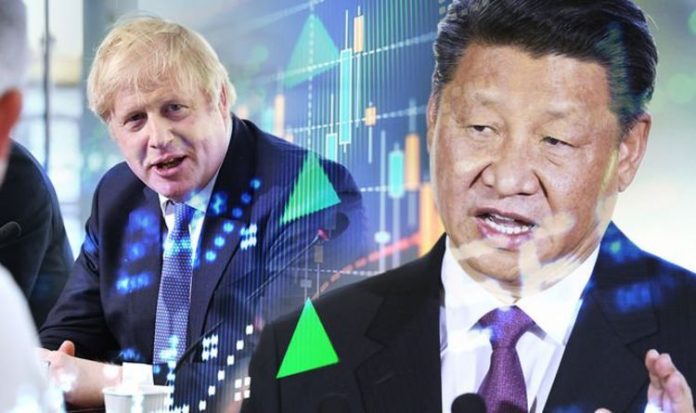 The UK must not allow itself to become overly dependent on China as it reclaims sovereignty from the EU, a pro-Brexit thank tank argues. Britain should, in fact, be working extremely hard to strengthen its ties with India, a Commonwealth country, as well as other growing economies such as Vietnam, Taiwan, and South Korea. Doing this could sideline China and its economic dominance as Prime Minister Boris Johnson sets out to forge Brexit Britain’s new role on the international stage.

A paper by the Foundation for Independence reads: “The current COVID-19 crisis has laid bare the unsavoury nature of the Chinese Communist Party (CCP) and has led to an increased scrutiny of China’s actions.

“In recent weeks the PRC has suppressed democratic protest in Hong-Kong, undermined the credibility of the WHO, made hostile excursions into other state’s EEZ, pushed ahead with illegitimate claims of sovereignty over island archipelagos, and continued with the use of illegal trade practices.

“China can confidently be described as a ‘revisionist’ state – one that challenges, rather than adheres to, the status quo.”

With this in mind, the study notes, the Indo-Pacific is the arena within which the future wrangling of international ideals will take place.

The authors said: “Many nations in the region have already taken measures to defend well-established international principles in the face of such Chinese revisionism. This has been in the form of internal legislation, of military alignment, or of appeals to international bodies.”

However, Britain has not been able to do so, due to the economic model pursued by successive governments, which has seen “an unnecessary outsourcing of key strategic industries to the People’s Republic of China”.

Not only has this made the UK worryingly dependent on Chinese imports and investment, but it has also greatly reduced the available policy space required to effectively condemn Chinese indiscretions, the paper said.

Launching a thinly veiled attack on former Prime Minister David Cameron, the authors added: “In 2015, the UK was one of the first European states to join the Asian Infrastructure Investment Bank (AIIB), despite serious concerns in Washington.

“Similarly, the domestic inclusion of Huawei at the heart of the British 5G network, and the ‘Osborne doctrine’ prescribing China as the UK’s most valuable Asian partner, have put greater distance between the values that the UK is displaying , and what its regional allies want it to be doing.

“This blind courtship was pointed out by the foreign affairs select committee in April 2019: ‘The UK’s approach [to China] risks prioritising economic considerations over other interests, values and national security'”.

For this reason, according to the paper, the UK must rectify its stance and pursue a free and open Indo-Pacific strategy (FOIP) in the region.

The study explained: “[The strategy] should be the set of guiding principles that prescribe the necessary action for any given situation. It would help to ensure a consistency of British action which has hitherto been lacking.

“This would provide greater confidence in the UK from its allies, and a greater understanding by adversaries of what motivates specific UK responses.

“It would also align the UK with the region’s other democratic states. India, Japan,the United States, Australia, South Korea, and even Taiwan all have strategies that could be recognised as akin to the FOIP proposal.”

The key themes across these nations’ FOIP strategies, the report noted, are: support for multilateral bodies such as the United Nations Convention on the Law of the Sea (UNCLOS), an unwavering respect for the sovereignty of all states, the importance of free trade for global prosperity, the peaceful resolution of disputes through intentional forums, and the importance of open investment in Southeast Asia.

Given the current supremacy of China’s Belt and Road Initiative (BRI) particular credence should apparently be given to this last point.

The study added: “For too long the BRI has been the only infrastructure game in town for Southeast Asian states.

“The primary intention of this policy is to multiply Chinese hegemony and influence through the creation of ‘debt colonies.’

“A multilateral FOIP strategy must offer governments a viable alternative to over-reliance on this geopolitical weapon.”

It comes as EU and UK negotiators struggle to find a way to overcome “significant divergences” in their attempt to seal a post-Brexit agreement.

Following the UK’s departure from the EU on January 31, the two sides are trying to secure a new trade deal before the end of the year, when Britain will effectively exit the EU’s customs union and single market.

However, negotiations have proved difficult and the parties appear far apart on a number of issues including regulations for businesses and the fishing industry.

The UK’s chief negotiator David Frost and his EU counterpart Michel Barnier have now planned more talks all the way until October 2, less than a fortnight before a summit where the bloc hopes to endorse an agreement with London. 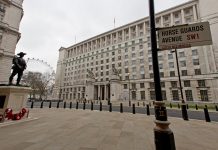 Troops and veterans one step closer to stronger legal protection