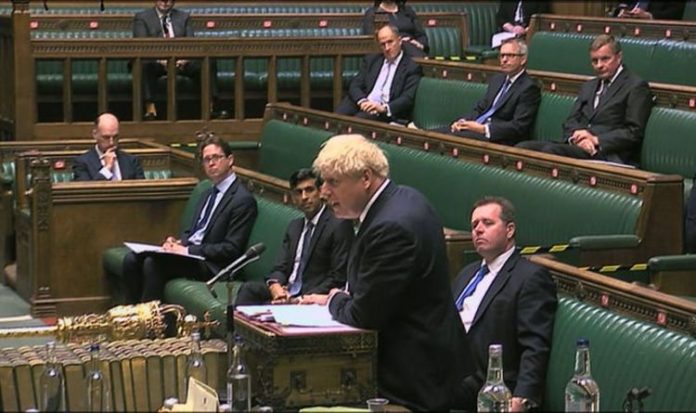 The Prime Minister’s comments were cut off by the Speaker who called for order.

Sir Keir called for Mr Johnson to withdraw his comments, pointing to his role prosecuting members of terror groups in Northern Ireland.

He suggested that Mr Johnson was attempting to bring up the issue to distract from the government’s failures.

He added: “It’s the same every time, pretend the problem doesn’t exist, brush away scrutiny, make the wrong decision then blame somebody else.”

Commons Speaker Sir Lindsay Hoyle also asked if the Prime Minister wanted to withdraw his allegation he made about the Labour leader.

But Mr Johnson did not withdraw his comments.

He replied: “I am very happy to say that I think… I listened to the protestations of the right honourable gentleman and think they have would have been more in order throughout the long years in which he supported a leader of the Labour Party (Jeremey Corbyn)…”

Sir Lindsay then signalled for Mr Johnson to sit down.

In response, Sir Keir said: “When the Prime Minister has worked with the intelligence and security forces prosecuting criminals and terrorists he can lecture me.”

Following the exchanges, a spokesman for Sir Keir said: “One thing we would remind the prime minister is that he has the power to block Claire Fox being nominated as a member of the House of Lords.

“So if he wants to take any action on this issue we suggest he does that.”

Miss Fox was recently handed a peerage by Johnson.

Before signing up to Nigel Farage’s Brexit Party in 2019, she was a leading member of the Revolutionary Communist Party (RCP).

The RCP defended the bombing and the “the right of the Irish people to take whatever measures necessary in their struggle for freedom”.

Tim Parry’s father, Colin Parry, said at the time that offering a peerage to Fox “offends me and many others deeply”.

Miss Fox has previously said she has the “greatest sympathy” for the Parry family but has not gone as far as apologising.

Amanda Milling, the co-Chairman of the Conservative Party, said: “Sir Keir Starmer cannot hide from the fact that for years he propped up a terrorist sympathiser as Labour leader when he was Jeremy Corbyn’s close ally.

“It is also now clear that Sir Keir has spent a lifetime defending those who want to harm the UK.”