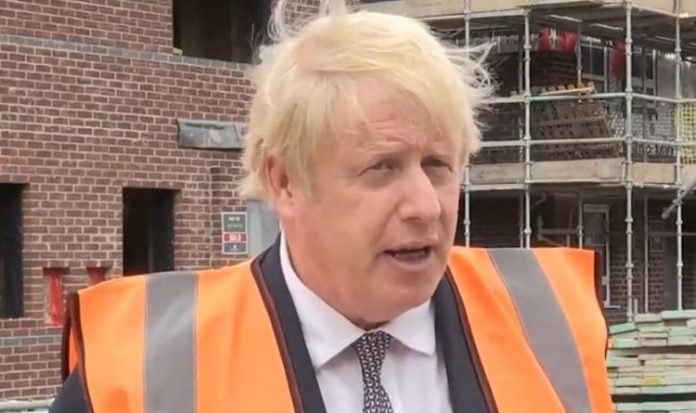 Boris Johnson repeated his claim that the NHS Test and Trace system was “world-beating” despite reported issues with it. Experts have warned the system must rapidly improve to cope with the pressures expected once schools fully return in September and as winter approaches. But the Prime Minister defended the system and said the UK is testing more people than any other country in Europe.

He told reporters: “If you look at what we are doing, actually I think it certainly is – it certainly does fit that description of ‘world-beating’.

“I think I’m right in saying that we are now testing more – per head of population – than virtually any other country in Europe. Certainly, in America, they are testing a huge number of people.

“If you look at what we are doing with some of the local social distancing measures that we are bringing back in, that’s entirely driven by our ability to detect cases through local test and trace, working with our local authorities and taking the right local measures.

“That is how we hope that we will be able to keep the lid on the disease.”

Last week’s figures showed the system – which Boris Johnson said would be “world-beating” – was unable to reach a quarter of the contacts provided by infected people.

In recent days scientists have voiced concerns about how well the system will be able to cope over the winter, a time when the Prime Minister wants a “more significant return to normality”.

The authors of a modelling study said that without appropriate levels of testing and contact tracing, reopening of schools together with gradual relaxing of the lockdown measures are “likely to induce a second wave that would peak in December 2020 if schools open full-time in September”.

The study by researchers from UCL and the London School of Hygiene and Tropical Medicine (LSHTM), published in The Lancet Child And Adolescent Health, warned that in a worst-case scenario a second wave could be 2.3 times higher than the first.

But its authors said: “With increased levels of testing, effective contact tracing and isolation, an epidemic rebound might be prevented.”

One of the authors, Chris Bonell, professor of public health sociology at LSHTM, said the key message from the modelling paper was that the “test, trace isolate system is critically important and getting better but coverage must further increase”.

Reports have suggested that some contact tracers working for the NHS Test and Trace programme in England are making just a handful of calls a month.

UK coronavirus panic as R rate could have soared to 1.8 in one region [INSIGHT]
India on the brink: Spiralling cases risk coronavirus ‘blast’ – expert
No deal Brexit boost as impact ‘dwarfed’ by coronavirus, says BoE [VIDEO]

The Department of Health and Social Care has also defended the record of the system.

Some councils have taken matters into their own hands and launched local contact-tracing operations to supplement the national system.

Calderdale Council, which covers Halifax and surrounding areas, is the second authority to make the move after Blackburn and Darwen said it was setting up a locally focused system to utilise community knowledge.