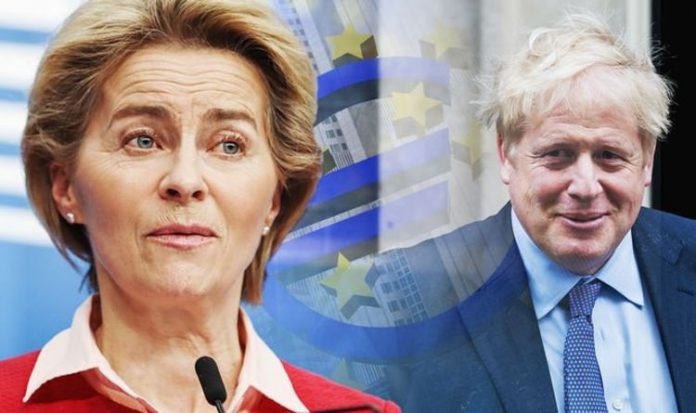 The EU’s chief negotiator Michel Barnier has continuously lashed out at the UK during post-Brexit trade deal negotiations, warning the stubborn nature of Boris Johnson’s team on several red lines has made a deal with Brussels “unlikely”. But an editorial from Dutch newspaper Het Parool has claimed although the UK looked “more fragile than ever” as it became engulfed in China’s imposition of the controversial security law in Hong Kong, and the rejection of Huawei from the 5G network, London still remains more attractive to multinationals than the likes of Paris or Amsterdam. The article points towards the publication of Unilever’s half-year financial results, when the British-Dutch multinational consumer goods company climbed to the top of the FTSE 100 and overtook pharmaceutical company AstraZeneca, which is working on a coronavirus vaccine with Oxford University.

Last month, the manufacturer of brands such as Unox, Marmite and Dove decided on London for its headquarters over Rotterdam – despite the frantic efforts of Prime Minister Mark Rutte.

The decision was also praised by Business Secretary Alok Sharma, who praised the move from Unilever as a “clear vote of confidence in the UK”.

Despite several other global businesses expressing a desire to move their headquarter out of London after Brexit, “there is no sprint towards the exit”, as several others continue to state their intentions to settle in London, and will not move to Europe unless there is a “hard Brexit”.

The Dutch editorial says: “The United Kingdom was on track to outflank the eurozone over the next two years.

“Research by PricewaterhouseCoopers (PwC) revealed that CEOs find the country as attractive again as it was before the EU referendum.

READ  Meghan Markle news: How Oprah Winfrey is helping Meghan and Harry in the US | Royal | News (Reports)

“Yet billionaire James Dyson moved the headquarters of the vacuum cleaner giant of the same name to Singapore.

“Honda, Panasonic, Lloyds of London, P&O and Michelin left due to the approaching Brexit. Sony settled in the Netherlands, as did more than 140 smaller groups.

“However, there is no sprint towards the exit. Opposite the exodus is the arrival of at least 1,441 companies, a Wob request revealed last November.

The Dutch newspaper also says the Prime Minister is “opposed to regulation and for free trade” while the appointment of “moderate” Sir Keir Starmer as Labour Party leader means “multinationals have also had less to fear from the opposition”.

But the current stalled post-Brexit trade negotiations with Brussels “accentuate the dark sky”, with the prospect of a no deal outcome greater than ever.

Despite this, the Dutch editorial said: “Top economists unanimously expect a deal, according to a survey by news agency Reuters.

“The power of heavyweights such as Unilever and Shell influences this. The strength of the United Kingdom lies in its willingness to roll out the red carpet and not to throw up bags.”

Referring to pictures of Mr Johnson recently meeting fishermen on a boat in Orkney, the Dutch editorial hit back at suggestions the likes of Unilever could turn their backs on the UK if a trade deal with the UK isn’t agreed, by concluding: “The Prime Minister’s smile on the Orkney fishing boat subtly told a different story.

“Even in the eye of a storm, Britain remains a magnet for the big bucks.”