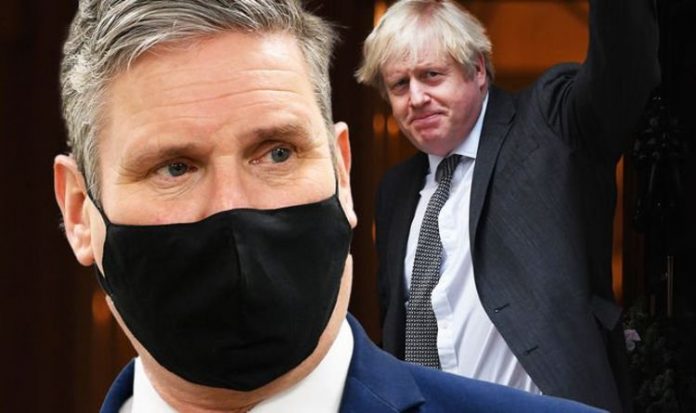 Labour’s hopes of reclaiming its natural territory in the north of England was thrown into question after Sir Keir’s approval ratings showed a gradual decline in support from the British public. Prime Minister Boris Johnson’s approval ratings on the other hand slowly rose since the end of December. The number of people who said they believed the Conservative leader was doing a bad job had dropped while the number of people who thought Sir Keir was doing well as opposition leader sank.

It will be a blow to both Sir Keir and Labour as the party attempts to galvanise support in working class areas of Britain.

This is especially true as the local, mayoral, Scottish and Welsh elections approach this May.

Paul Embery, a leading trade unionist and Labour member, expressed concern to Express.co.uk after he said Red Wall voters and working class communities will back the Tories again should Mr Johnson and his cabinet prove themselves.

Already the Government has rolled-out one of the world’s most ambitious vaccination programmes, trailing only to the United Arab Emirates and Israel, an impressive feat given the recent EU-UK AstraZeneca debacle.

Boris Johnson: The PM was given the keys to the Red Wall as Starmer’s approval ratings bombed (Image: GETTY)

Mr Johnson has also delivered on a promise of a deal with the EU, secured in the waning days of 2020.

Policy fulfillments like this could swing Britons who voted blue for the first time in 2019 to back the Tories once again.

Mr Embery said: “Whether or not these communities will vote for Johnson again, that will be determined by what happens in the next four years.

“Many of these communities, these Labour Red Wall seats, placed their faith in the Tories for the first time and they want payback.

JUST IN: She has a northern accent but Lisa Nandy speaks pure Islington COMMENT

“It took a lot for many of them to vote Tory, it went against everything that they stood for – there were stories of people having their grandfather whispering in their ear when they were in the polling booth.

“But having done it once I think they’ll do it again if the Tories deliver.

“These Northern and Midland constituencies, if Johnson is seen to be tangibly improving the lives of those communities, investing in them, bringing back jobs, really industrialising, regenerating, then I think people may well vote for the Tories again and that’s Labour’s real danger.”

According to YouGov, the number of people who think Mr Johnson is doing a good job in Government has risen since the end of December 2020, while those who believe he is handling Britain badly has dropped in the same period by two percentage points.

It comes as many note Sir Keir is lacking in properly holding Mr Johnson to account.

Political commentator Rafael Behr, in a piece for The Guardian earlier this month, wrote how Sir Keir won’t “bring voters back to Labour with just a list of Tory failures”.

He referenced the speech Sir Keir gave at the beginning of the year that listed all of the Tory Government’s failings but went largely missed.

Red Wall: The PM has been more proactive in his focus on the north of England since 2019 (Image: GETTY)

Corbyn: Starmer is also facing a decline in his popularity among members over the Corbyn debacle (Image: GETTY)

Although concerted, this style of holding power to account, Steven Fielding, Professor of Political History at the University of Nottingham, told Express.co.uk is one that Sir Keir will continue to pursue.

He said that the Labour leader would rather not be goaded into a full-frontal attack on the Government, but to let Mr Johnson’s actions speak for themselves, and to point out what to do, when to do it, ahead of the trends.

Prof Fielding said: “His position has usually been, what the Government does is fine, it’s just too little and too late.

“The Government is now essentially doing what he’s said in terms of going with the tiers, and is now doing the right thing – but it’s always too late.

“And by that point things have got worse, so, yes: it’s a position that some people might find frustrating, but nonetheless it’s a valid position.

“He wants the Government to act more quickly and to get its act together, that’s a valid position to have.

“He doesn’t want to appear to be too extreme, on that issue. He is playing politics, but nonetheless, he is saying sensible things.”

He will be tasked with addressing the widespread debt the UK has found itself in as a result of the coronavirus pandemic.

The Treasury has said “the Budget will set out the next phase of the plan to tackle the virus and protect jobs”.

Many fear it could mark the continuation of austerity that has gripped Britain for more than ten years, and consequently push away Red Wall and working class voters.

This is £212.7billion more than a year ago, according to the Office for National Statistics (ONS).

National debt has now been pushed up to an astonishing £2.13trillion, a level not seen since the Sixties.