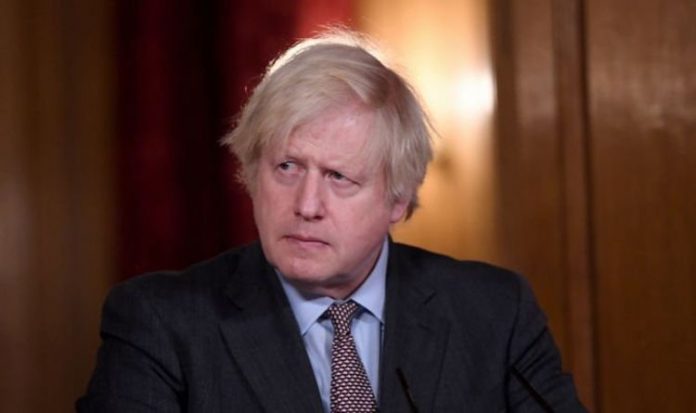 Brexit: France or Italy will leave next says Charles-Henri Gallois

The Prime Minister should now utilise Britain’s newfound freedom and steer the country further from Brussels, Paul Embery, a leading trade unionist told Express.co.uk. The EU this week found itself tangled in a coronavirus vaccine crisis after the bloc was delayed in rolling out its vaccine procurement programme. Member states had agreed to let Brussels negotiate prices and distribute doses on their behalf, but “bureaucracy” left many countries without the vaccines they expected to have by now.

Britain, meanwhile, has become a world leader in its vaccination programme, using the AstraZeneca vaccine, developed at the University of Oxford, to inoculate millions across the country.

The vaccine, however, is being produced in facilities in the Netherlands and Belgium, with those countries and neighbouring states forced to sit and idly watch as millions of doses make their way to the ports.

Britain opted not to sign up to the programme last year, citing concerns that it could lead to delays of up to six months.

Many have now noted that the crisis puts the UK in a favourable position.

Boris Johnson: The PM was told to pursue more state aid enterprises to give the UK a leg-up (Image: GETTY)

Even European leaders, like German Chancellor hopeful Markus Söder, note that Britain might “benefit economically” ahead of the bloc.

The Government has now been given a detailed roadmap on state enterprises to follow in order to give the UK a leg-up and surge ahead of its European counterparts in a post-Brexit world.

Mr Embery said Mr Johnson, if he wanted to, can now pursue state aid ventures and commit to his “levelling up” programme, reinvigorating British manufacturing and industry.

He explained: “It has to be the long-term goal of any Government.

“Obviously the trade and cooperation agreement has been written in a way where it’s not necessarily easy to do that, but nonetheless it is easier than when we were part of the EU.”

Mr Embery, however, was not hopeful that any major and radical change would occur under Mr Johnson.

He said: “I don’t in the short term see any serious change immediately in terms of that stuff around state aid.

“Brexit was a necessary but insufficient step; coming from a left-wing position, I know that leaving the EU with a Conservative Government in charge of Britain is not necessarily going to see the kind of economic programme, like heavy investment in industry, that should be rolled-out.

“Yet, ironically, I couldn’t see that previously with the Remainer ‘left’, as those people now seem to have no issue with the EU’s restrictions on state aid and the demands for a level playing field.

Paul Embery: He said the UK should boost industry and manufacturing in post-Brexit Britain (Image: Youtube/TheGuardian)

Jeremy Corbyn: Left-wingers like Corbyn campaigned to remain in the EU much to the surprise of many (Image: GETTY)

“It’s strange because it should be a first principle for any person on the left: That you don’t leave everything to market forces – that you have a Government that’s willing to intervene in the economy to support British industry and subsidies manufacturing.

“Nonetheless, for me, it’s always been a much longer term project, it’s about freeing ourselves from the shackles of the EU which I believe to be an institution explicitly very much in favour of market forces and pro-austerity, and against public ownership and state aid.

“Now, at least we’re free to do it in the future if we want to, and I think that’s the key point.”

Positive moves in terms of trade have already been made since the UK exited.

While a trade deal was stuck with Japan last year, international trade secretary Lizz Truss announced this week that Britain had applied to join the lucrative Comprehensive and Progressive Agreement for Trans-Pacific Partnership (CPTPP).

Described to the Express.co.uk as a potential “formidable force”, the CPTPP is made up of 11 countries, covers 500 million people, and accounts for around 13 percent of global GDP.

Importantly, this is more than the eurozone’s five largest economies combined, according to a Royal Bank of Canada report.

Rishi Sunak: The Chancellor is set to announce the Government’s budget in March (Image: GETTY)

Mr Johnson has also said the UK will now roll-out business tax and regulation changes as he seeks to use the “legislative and regulatory freedoms to deliver for people who felt left behind”.

Meanwhile, Chancellor Rishi Sunak said 2021 would begin a “new era” for Britain as he pledged to invest in the nation “to build opportunity for everyone” that was previously hindered as a result of EU membership.

The Government’s March budget, fast-approaching, is touted as including some of these promises.