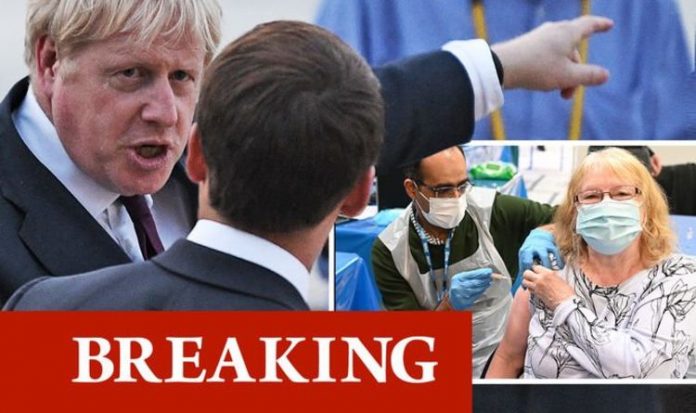 Mr Macron controversially claimed the AstraZeneca vaccine is “quasi-ineffective” for the over 65s.

This suggestion was angrily dismissed by the British Government and AstraZeneca.

According to Downing Street: “The leaders discussed the fight against coronavirus.

“The Prime Minister emphasised the important role world leaders will play in ensuring that vaccines are rolled out effectively so that we can defeat the pandemic.

“The leaders agreed that a successful global vaccination programme will require a collaborative effort between governments.”

The EU’s European Medicine Agency has approved the AstraZeneca vaccine for all age groups.

Mr Johnson used the call to argue Brexit could strengthen relations between Britain and France.

Downing Street said: “The Prime Minster said that the UK’s departure from the EU offered a huge opportunity to deepen and widen our bilateral relationship with France and the leaders looked forward to working together to realise that opportunity.

“The leaders discussed a number of international issues including Iran, Yemen, Libya and Russia. They agreed that European leadership from the UK, France and others continues to be instrumental in making the world safer and more secure.”

Number 10’s statement ended by noting: “The Prime Minister and President Macron agreed that cooperation remained crucial as we tackle the challenges ahead and resolved to stay in close contact.”

Britain has surged ahead of EU members states in delivering coronavirus vaccines.

As a proportion of their population only Israel and the United Arab Emirates have inoculated more.

He said: “I suspect this is a bit of demand management from Mr Macron.

“Well, if he didn’t have any vaccine the best thing you could do is reduce demand.

“The numbers still pointed toward a very highly effective vaccine but the numbers were small, in fairness, we always accepted that.”

Asked specifically about Mr Macron’s “quasi-ineffective” claim Sir John replied: “I’m not sure where he got that from.”

EU leaders have come under fierce pressure over the slow pace of their vaccination drive.

In response last week the European Commission suggested it could block vaccine exports outside the EU causing international outcry.

As part of the plan it proposed introducing a hard border between Ireland and Northern Ireland.

However the proposal was abandoned following fury in London, Dublin and Belfast.