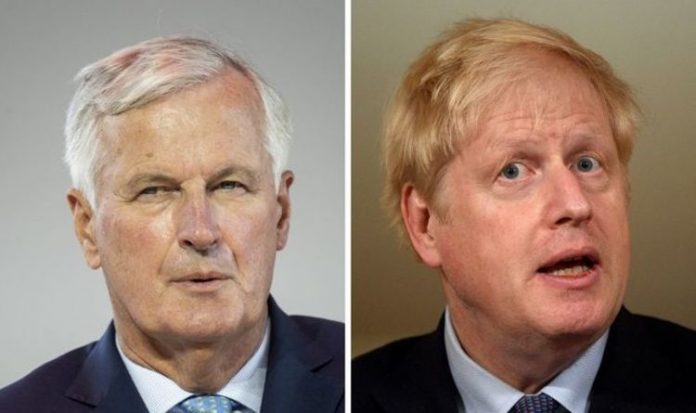 During a call with industry leaders, the Prime Minister told them time was ticking for the EU to sign a Brexit deal. Mr Johnson also stressed how business leaders had been busy dealing with coronavirus but must now push forward to prepare for the end of the transition period. During the call, Mr Johnson was joined by Cabinet Office Minister Michael Gove who insisted there would be long-term benefits to Brexit despite the short-term consequences.

Delivering his assessment to industry leaders, Mr Johnson said “rien ne va plus” or “no more bets” according to a source who was on the call.

The insider also claimed the mood among those on the call was of “disappointment” as they wanted more clarity.

According to the HuffPost UK, industry leaders also wanted Mr Gove and the Prime Minister to show their understanding of the needs of businesses going forward.

During the call, Mr Gove did say he would look into transition vouchers to help businesses.

These vouchers would give cash payments to firms to help cushion the blow from the change in trading terms from January 1.

Although the exact minutes and details of the call were not released, No 10 did release some of the quotes from Mr Gove and the Prime Minister.

Mr Johnson said: “Our job is to create the platform for dynamic businesses such as yours to compete and to grow.

“But it is vital that everybody on this call takes seriously the need to get ready, because whatever happens – whether it’s Canada or Australia – change is going to happen.

Despite their efforts today, the two sides failed to progress any further with a deal.

A No 10 spokesperson said today: “Lord Frost and Michel Barnier had a constructive discussion.

“The situation remained as yesterday, and they will remain in contact.”

Mr Barnier concluded after the talks today that the two sides should continue to intensify negotiations.

He added: “My message: we should be making the most out of the little time left.