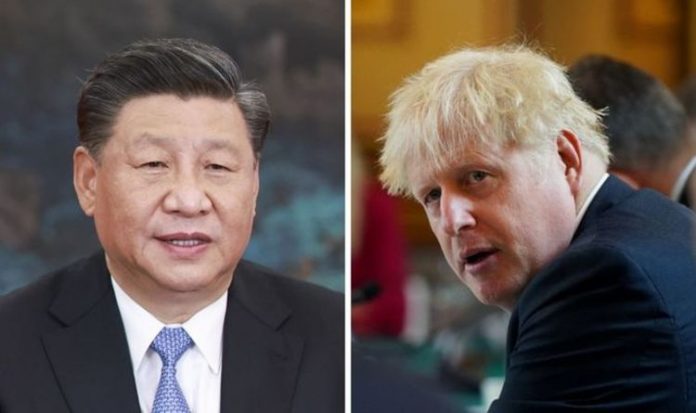 Ex-First Sea Lord of the Royal Navy, Lord Alan West, told Express.co.uk the UK could do more to support its Five Eyes ally against China. Lord West also criticised Beijing for its “appalling” behaviour towards Australia. A deepening rift between has emerged between China and Australia resulting most recently with the publication of an altered image of an Australian soldier on social media.

The incident comes amid a series of crippling trade actions taken against Australia by the Chinese government.

“The way they have bullied Australia has been outrageous.

“We do have strong ties with the Australian government but we probably could do more for the state.”

China has placed severe tariffs on Australian wine, barley and enforced a reduction in coal trade between the states.

The tariffs on wine have risen to up to 212 percent and are crucial as China accounts for 39 percent of Australian exports of the product.

Prior to the move from Beijing, Australia had also admitted its concern over the outbreak of coronavirus and also banned Huawei kit from its 5G network.

Australia has also strengthened its naval ties with India, Japan and the US in order to a show of force against China’s aggressive land grabs in the Asia-Pacific.

Lord West labelled the strike group as essential in maintaining Britain’s interests abroad, while also claiming the UK Government must make sure the Navy retains its place as one of the strongest in the world.

The Navy chief also claimed the increase in funding for the armed forces from the spending review was a welcome boost.

Last month, the Prime Minister told MPs a four-year funding deal would create thousands of jobs in the industry while ensuring the safety of the nation.

Overall, the Prime Minister pledged £16.5billion in defence spending after years of cuts to the sector.

Mr Johnson said: “The international situation is more perilous and more intensely competitive than at any time since the Cold War and Britain must be true to our history and stand alongside our allies.

“To achieve this we need to upgrade our capabilities across the board.