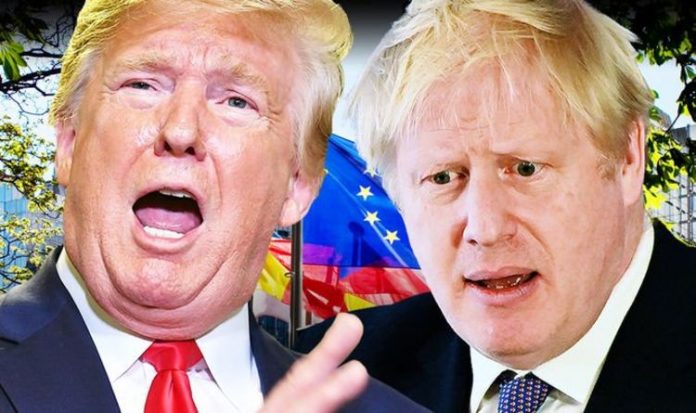 Last week, the Speaker of the House of Representative Nancy Pelosi warned the UK that there will be “absolutely no chance” of a trade deal with the US passing Congress should the Government override the Brexit withdrawal agreement signed by the Prime Minister. The Democrat said Brexit could not be allowed to “imperil” the Good Friday Agreement – brokered to establish peace in Northern Ireland after years of sectarian unrest. It comes after Mr Johnson unveiled plans to override key elements of last year’s Brexit deal with the EU regarding Northern Ireland checks.

In a statement on Wednesday, Ms Pelosi said: “The Good Friday Agreement is the bedrock of peace in Northern Ireland and an inspiration for the whole world.

“Whatever form it takes, Brexit cannot be allowed to imperil the Good Friday Agreement, including the stability brought by the invisible and frictionless border between the Irish Republic and Northern Ireland.

“If the UK violates that international treaty and Brexit undermines the Good Friday accord, there will be absolutely no chance of a US-UK trade agreement passing the Congress.

“The Good Friday Agreement is treasured by the American people and will be proudly defended in the United States Congress.”

While Ms Pelosi’s claims constitute a warning for Mr Johnson, the Prime Minister might be more concerned with what Mr Trump said about a US-UK trade deal.

In 2018, Mr Trump told former Prime Minister Theresa May that a soft Brexit would have “killed” the chance of a trade deal with the US, in comments that hugely undermined her attempts to win support for her Chequers deal.

On the first day of the US President’s four-day visit to the UK, he suggested Mrs May was not delivering the Brexit the British people voted for and said she had not listened to his advice on how to negotiate.

He said: “I would have done it much differently.”

JUST IN: End of euro: Why ‘Nordic-style measures are key to Europe’s survival’

Mrs May had spent the week reassuring the public and her own MPs that her controversial Chequers agreement on Brexit would have still allowed Britain to strike ambitious trade deals with the US and other countries.

But Mr Trump pulled the rug from under her feet by saying: “If they do a deal like that, we would be dealing with the European Union instead of dealing with the UK, so it will probably kill the deal.”

In an interview with newspaper, Mr Trump said: “I would have done it much differently. I actually told Theresa May how to do it, but she didn’t listen to me.”

He added: “The deal she is striking is a much different deal than the one people voted on.

“It was not the deal that was in the referendum…I know they have had a lot of resignations, so a lot of people don’t like it.”

Mr Johnson does not seem to be pushing a soft Brexit.

On the other hand, the Government seems to be working under the assumption Britain will leave the transition period with the EU without an agreement in place.

The publication of the Internal Market Bill last week, under which key parts of the withdrawal agreement agreed last year would be rewritten, has enraged the EU and prompted a fresh rebellion within the Conservative Party.

Brussels has set Mr Johnson a three-week deadline to ditch his plans or face financial and trade sanctions, with the clear suggestion that negotiations over a future relationship will fail unless the most contentious parts of the proposed legislation are removed.

However, Downing Street believes the row with the EU may ultimately prove to be a welcome disruption to the talks, which had been in deadlock throughout the summer over the most thorny issues of the Government’s future domestic subsidy regime and access to British waters for EU fishing fleets.