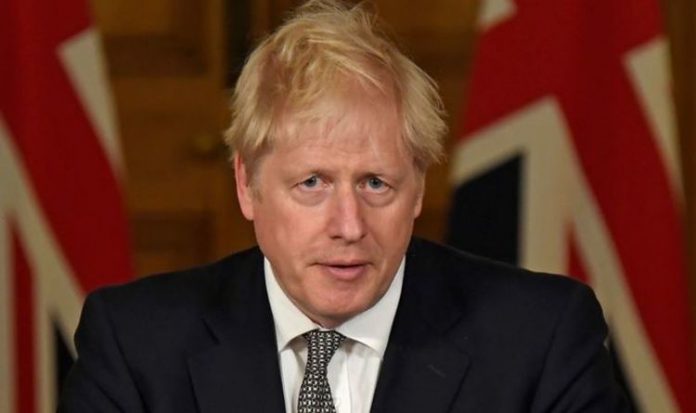 Last night, Boris Johnson announced England would enter a second national lockdown which would begin on Thursday and would run through until December 2. The Prime Minister and his Government had defied calls for such drastic measures following increasing criticism over the new localised three-tier lockdown system introduced last month but have now been attacked on Twitter for the latest huge U-turn. On October 21, the Conservative Party tweeted a video of Mr Johnson addressing Labour leader Sir Keir Starmer during Prime Minister’s Questions (PMQs) in the House of Commons about why a more localised approach was the best way to fight the coronavirus pandemic.

The Tories tweeted: “Labour have admitted wanting repeated national lockdowns. Our approach will keep our country and its regions moving.”

In the video posted to Twitter, Mr Johnson had said: “We will do whatever it takes to get this country through the crisis, with or without the Rt. Hon. Gentleman opposite.

“I’ve explained why I don’t believe his policy is the right one for the country because it would involve closing schools, shuttering businesses.

“With all the psychological, emotional damage that lockdown of that kind brings.

“We on the other hand want to go on with our common sense approach, which is a local and regional approach, keeping kids in school, keeping our economy moving.

“That is the way to get the whole of our country together so that we all, and particularly those regions that are now, alas, under Tier 3 restrictions, all the regions of the country, bounce back strongly.”

But Mr Johnson and the Conservatives have been brutally mocked for that statement after performing a massive U-turn by introducing a second national lockdown after saying for so long that it was not an option.

READ MORE: ‘Scientists have too much influence on Government and Covid policies’

One person wrote: “This looks like a right f*** up now, lads. I’d probably delete it if I were you.”

A second person tweeted: “Will you be deleting or updating this tweet next week?”

Another person tweeted: “Conservatives have no idea what they are doing. Fact.”

Boris Johnson explained why he is placing England back into another lockdown (Image: GETTY)

Labour leader Sir Keir Starmer also lashed out at the Prime Minister for the massive national lockdown U-turn, warning the delay of its introduction will have “very real” human cost and cause restrictions to drag on for longer.

He raged: “Everybody is concerned about the rise in infections, the hospital admissions and tragically the number of deaths. That’s why three weeks ago, I called for circuit-break,” Sir Keir told reporters.

“The Government completely rejected that only now to announce the self-same thing.

“Alas the delay now will cost, the lockdown will be longer, it’ll be harder and there’s a human cost which will be very, very real.”

Coronavirus cases have been surging throughout the UK (Image: EXPRESS)

The British Medical Association said it was “regrettable that warnings from Sage were not actioned as long ago as 21 September”.

During his press conference on Saturday evening, Mr Johnson said “no responsible Prime Minister can ignore” the rising rates of coronavirus infections, admitting cases had not come down fast enough in the worst affected areas of the country.

All non-essential shops, leisure and entertainment venues will be closed, while bars, pubs and restaurants must also stay closed except for delivery or takeaway services.

People must stay at home, except for specific reasons such as education if it is not provided online, and work if they cannot work from home and for exercise.

The population will be allowed to exercise and socialise in public spaces outside with their household or one other person, but not indoors or in private gardens.

Schools, colleges and nurseries will remain open, as will NHS and medical services such as GPs.

Mr Johnson said: “We know the cost of these restrictions – the impact on jobs and livelihoods, and people’s mental health. No-one wants to be imposing these measures.

The Prime Minister warned coronavirus “spreading even faster than the reasonable worst-case scenario of our scientific advisers”.

He added: “Unless we act, we could see deaths in this country running at several thousand a day – a peak of mortality, alas, bigger than the one we saw in April.”