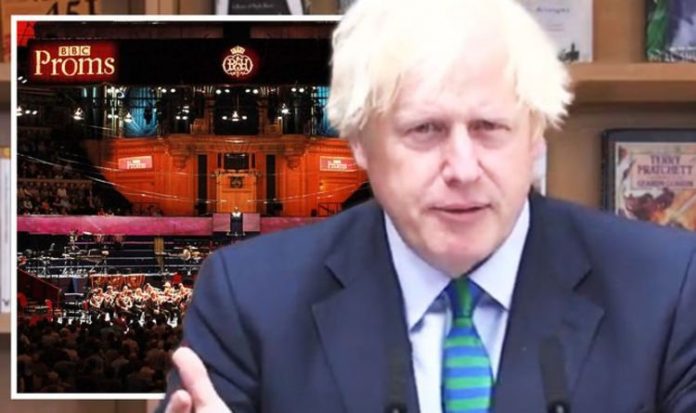 During a visit to a school in the East Midlands, Boris Johnson thanked pupils for their efforts to limit the spread of coronavirus. But as he explained what can be learned in school, the Prime Minister said how it is “politically acceptable” to sing Rule, Britannia! His comments come after new, orchestral versions of Rule, Britannia! and Land Of Hope And Glory will be performed on the final night of the Proms this year without lyrics.

Mr Johnson said: “From getting back into the school the hours and days and weeks of this new term you will experience things with an intensity and clarity that is seldom repeated in your lives.

READ  All students offered testing on return to university

“You will remember these days, weeks and months, you really will.

“When you’re struggling with something in the classroom with a concept you can’t get like nuclear fusion or is Harry Potter sexist? The answer is no by the way.

“Is it politically acceptable to sing Rule Britannia? Yes.

READ MORE: After another screeching U-turn, should masks be worn in schools?

“When you’re struggling with complex questions or things you’re worried about, somebody, probably a brilliant teacher, will say something and a light will go on, the clouds will lift and you will never ever forget that moment.

“That moment is absolutely irreplaceable and it can only happen in school.

“That’s why education is the great equaliser, the liberator, the transformer of society and it’s the single most important way that we can unite and level up across this whole country and deliver social justice.

“That is why in the next week and succeeding days we must have every pupil back in school.”

But he confirmed that the issue of dropping songs because of their association with Britain’s imperial history had been discussed.

A spokesman for the BBC said: “For the avoidance of any doubt, these songs will be sung next year.

During a visit to Devon on Tuesday Mr Johnson said he wanted to get his thoughts “off my chest”.