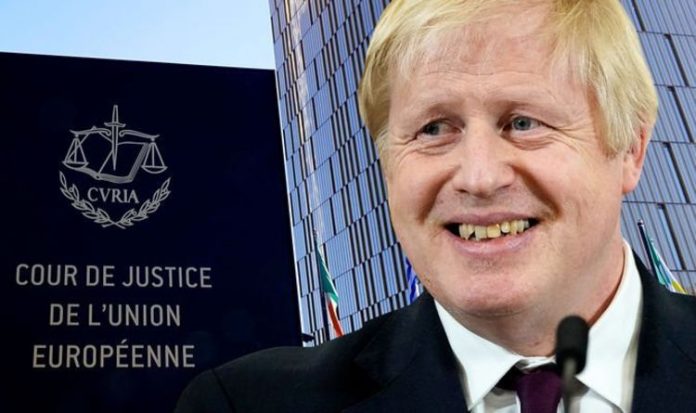 The European Commission has launched legal action against the UK, after MPs passed the Internal Market Bill, which overrides parts of the withdrawal agreement. The EU had set Britain an end of month deadline to withdraw clauses in the Bill, which it said broke international law. The Commission said it would “not be shy” in taking “legal remedies” unless the UK backed down over the provisions on state aid and export declarations on goods from mainland Britain to Northern Ireland.

Downing Street refused the same day and the Bill was passed last Tuesday by 340 votes to 256.

It will now go to the House of Lords.

As many wonder whether Prime Minister Boris Johnson will mention the proceedings in his Conservative Party conference speech today, a recent report by a Commercial Chancery barrister, Steven Barrett, explains why the EU simply cannot sue the UK.

He wrote: “Now, as I sue people for a living, it would behove me to argue that the EU must not ever sue the UK. It is a political question on which people will naturally disagree.

“There is however an important legal question — whether or not the EU can sue the UK in law. It is unfortunate for the EU that a consensus has emerged amongst lawyers that the EU has no grounds for suing the UK; it has no case.

“Even someone who supported the EU suing the UK would be unlikely to support it doing so when it has no case.”

The reason the EU has no case is itself relatively simple, Mr Barrett said, as they have acted “too soon”.

He continued: “The issue at hand is the Internal Market Bill. An Act is law; a Bill is a proposed law. Until a Bill is an Act, it’s nothing.

“The EU is basing its legal action on the idea that the UK has breached Article 5 of the withdrawal agreement.”

Mr Barrett noted: “The EU is now trying to argue that the UK has made a measure that jeopardises the agreement.

“Sometimes legal questions are tricky. This is not tricky. The UK hasn’t made an Act yet. It hasn’t ‘made’ anything because a Bill is not an Act. As a result it certainly hasn’t made a measure.

“If the Bill becomes an Act will that be a measure? I doubt it because the definition of measure in EU case law is more demanding – although, any fight over this point won’t use EU law to answer what a measure is. But until there is an Act, I don’t see anyone who would argue there is a measure and the legal consensus on this has been edifying.”

Mr Barrett concluded in his piece for the Spectator: “I do not therefore need to comment on whether it is helpful or a good idea to suddenly sue a negotiating partner (and ally) during a negotiation. I do not need to address the very real concerns many lawyers now have as to the independence of the ECJ.

“The EU’s letter is not law, it is politics. It is, I think, a misjudged piece of negotiation theatre, but tastes in theatre differ. The EU should withdraw the letter and the negotiation should go on because real people across the UK and the EU really need a deal.

“No one needs theatre 51 months into a negotiation.”