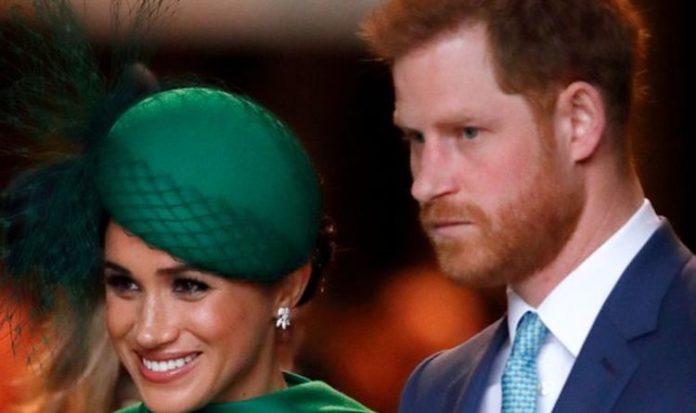 Speaking to ITV Good Morning Britain, celebrity expert Perez Hilton claimed Americans are no longer fascinated with Meghan Markle and Prince Harry since the coronavirus pandemic has been crippling America and the rest of the world. The royal couple moved to Los Angeles, California, at the beginning of the year after announcing they would no longer serve as working members of the Royal Family. But Mr Hilton said they now suscitate very little interest in the American people, something which could cost them their celebrity status and future endeavours.

Mr Hilton said: “I think the pandemic has been awful for so many people but also for their celebrity.

“Personally I am much less invested in Meghan Markle and Prince Harry and all that drama right now than I was in January when their departure made worldwide news.

“Of course, we still care about them, she’s American, they’re living in Santa Barbara.

“But in America at least there isn’t that fascination that existed with the two of them just eight, nine months ago.”

Meghan and Harry have had the highest environmental impact among the 10 senior royals analysed by a study commissioned by Save On Energy.

The company comparing gas and electricity suppliers in the UK conducted an analysis on the royals’ travel footprint, support to environmental charities, attendance to engagements focused on the environment, social media posts on the issue, use of electric cars and sustainability of their wardrobes.

After coming up with a scoring system which combines these behaviours, Save On Energy crowned Prince Charles the most eco-friendly member of the Royal Family.

This system has given three points to every royal attending an engagement focused on the environment and has taken away three points for every tonne of CO2 created.

Prince Charles managed to be awarded first place despite performing the worst in a damning analysis of his travel footprint.

According to this study, only Prince Philip, who retired from public duties in August 2017, scored zero when it came to CO2 footprint.

Prince Charles racked up the highest CO2 emission due to his use of chartered flight to several engagements and tours.

Prince William came in second this chart, followed by Meghan and Harry.

The Duke and Duchess of Sussex had been criticised by royal watchers and commentators over the 2019 summer for going on holiday to Spain and France using private jets.

But these trips have not been counted by this study, as it only took into account journeys included in the Royal Travel Report.